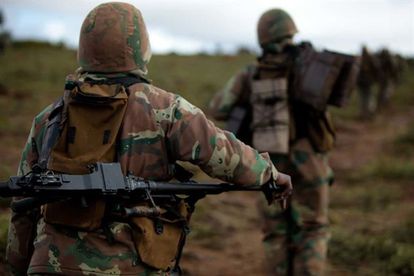 A Captain in the South African National Defence Force (SANDF) was arrested for his involvement in a cash-in-transit heist earlier this month.

The Hawks spokesperson, Zinzi Hani said the cash-in-transit heist took place at a petrol station in Oudtshoorn on Monday 19 July 2021.

“Security guards from Fidelity Cash Solutions were robbed while collecting cash from a petrol station.

“One of the security guards was accosted by two armed suspects while on his way back to his armoured vehicle.

“He was disarmed of his service pistol and robbed of a bag containing cash.”

Minutes after the robbery, the Hawks’ team stopped a Nissan Sentra and arrested three occupants.

“A search of the vehicle resulted in the seizure of the stolen security guard firearm and sealed money bag containing the stolen cash, along with a second firearm which had its serial number filed off.”

“None of the three occupants were soldiers. A loyal service medal was pinned to the jacket with the name and rank of the SANDF member.

“Further probing found that the vehicle that was used in the robbery, a white Toyota Tazz fitted with false number plates, had been driven by the SANDF member.”

“On Wednesday 21 July 2021, the Hawks team followed up on information received from Oudtshoorn detectives on the whereabouts of the Toyota Tazz used in the robbery.

“The Tazz was found parked inside a garage of a residence in Oudtshoorn, not far from the Infantry School. The set of false number plates used in the robbery was found inside the vehicle. Consequently, the SANDF member was arrested.”

The SANDF Captain is due to appear in the Oudtshoorn Magistrates Court on Monday, 26 July 2021.

He faces a charge of robbery with aggravating circumstances.