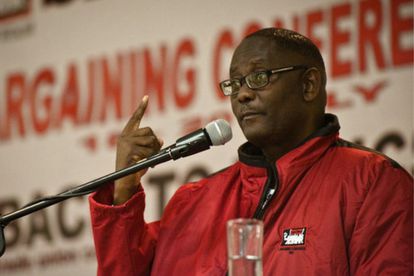 The says that the decision to place Vavi on suspension was unconstitutional.

On Sunday, SAFTU said its National Executive Committee held a meeting to discuss the turmoil that engulfed the federation in the past two weeks.

“Following an intense discussion on the constitutionality of the decision to suspend Secretary General Zwelinzima Vavi. A motion was moved to suspend the four national officer bearers of SAFTU that orchestrated such a suspension.

“Following further deliberation on the motion and other alternatives, the matter was eventually put on a vote. The overwhelming members decided to put the national office bearers on a suspension immediately, effective 26 March 2022.”

WHY WAS ZWELINZIMA VAVI PLACED ON SUSPENSION?

Vavi’s suspension  letter, dated 15 March 2022 had been doing the rounds on social media.

In it, SAFTU President Mac Chavalala noted that there were “quite a number of transgressions” against Vavi which were tantamount to misconduct and misbehaviour.

Vavi was given until Thursday, 17 March 2022 to provide reasons why he should not be placed on precautionary suspension following allegations of misconduct and misbehaviour.

But 14 unions under SAFTU disagreed, including Nupsaw, DETAWU and FAWU, and called on Vavi to disregard the suspension letter.

Vavi was accused of having misused the federation’s credit card.

“That agenda is not going to succeed. There’s no leader of SAFTU in his right mind that can fall into that agenda. It’s going to be an agenda of a tiny minority of desperate people who are determined to kill the unity of the working people. And I want to assure workers in this country that, that agenda has already failed. Look at how the unions in the labour federation have responded. We will also respond in the national executive committee.”

Zwelinzima Vavi on his suspension

ALSO READ: “The agenda is not going to succeed” – Vavi on Saftu suspension