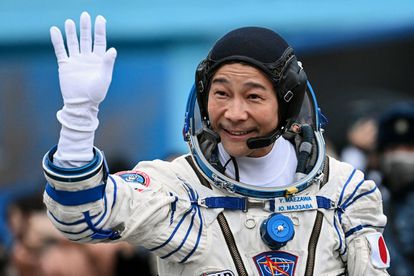 Japanese billionaire Yusaku Maezawa waves before boarding the Soyuz MS-20 spacecraft prior to the launch at the Baikonur cosmodrome on December 8, 2021. Photo: Kirill KUDRYAVTSEV / POOL / AFP

Japanese billionaire Yusaku Maezawa waves before boarding the Soyuz MS-20 spacecraft prior to the launch at the Baikonur cosmodrome on December 8, 2021. Photo: Kirill KUDRYAVTSEV / POOL / AFP

A Russian rocket lifted off on Wednesday carrying a Japanese billionaire to the International Space Station (ISS), marking the country’s return to space tourism after a decade-long pause that saw the rise of competition from privately held US companies.

Online fashion tycoon Yusaku Maezawa and his production assistant Yozo Hirano blasted off from the Russia-leased Baikonur cosmodrome in Kazakhstan at 0738 GMT, an AFP correspondent at the scene said.

Their journey aboard the three-person Soyuz spacecraft piloted by cosmonaut Alexander Misurkin will take just over six hours, capping a banner year that many have seen as a turning point for private space travel.

On launch day, Maezawa and his crew left their hotel in Baikonur to a Soviet-era song played for all cosmonauts ahead of their flights. The song, about cosmonauts missing home, was sung partially in Japanese.

Maezawa’s family and friends – some holding Japanese flags – waved him off as he was driven to get his spacesuit fitted.

Fellow billionaires Elon Musk, Jeff Bezos and Richard Branson all made breakthrough commercial tourism flights this year, bursting into a market Russia is keen to defend.

TRIO WILL SPEND 12 DAYS ON THE STATION

After docking at the Poisk module of the Russian segment of the ISS, the trio will spend 12 days on the station. The Japanese tourists plan to document their daily life aboard the ISS to share on Maezawa’s popular YouTube channel.

The 46-year-old billionaire has set out 100 tasks to complete while on board, including hosting a badminton tournament in orbit.

The ISS is home to an international crew of seven people including two Russian cosmonauts and a Japanese astronaut.

Maezawa, who is a space enthusiast, also plans to take eight people with him on a 2023 mission around the moon operated by Musk’s SpaceX.

He and his assistant will be the first private Japanese citizens to visit space since journalist Toyohiro Akiyama travelled to the Mir space station in 1990.

Before its pause from the industry, Russia had a history of shepherding self-funded tourists to space.

In partnership with US-based company Space Adventures, the Roscosmos space agency has taken eight tourists to the space station since 2001 – one of them twice.

The last was Canada’s Cirque du Soleil co-founder Guy Laliberte in 2009, who became the first clown in space.

In October, Russia launched its first untrained cosmonauts into space since that trip, delivering a Russian actress and director to the ISS where they filmed scenes for the first movie in orbit.

Moscow had stopped sending tourists to space after NASA retired the Space Shuttle in 2011, which left Russia with a monopoly on supplying the ISS.

But that all changed last year when a SpaceX spacecraft successfully delivered its first astronauts to the ISS.

NASA began purchasing flights from SpaceX, stripping Russia of its monopoly and costing its cash-strapped space agency millions of dollars in revenue.

While the cost of tickets to space for tourists has not been disclosed, Space Adventures has indicated that they are in the range of $50-60 million.

Roscosmos has said it plans to continue growing its space tourism business, already commissioning two Soyuz rockets for such trips.

The agency is also advertising a spacewalk to be carried out by a tourist during an ISS trip in 2023.

But Roscosmos is facing competition from SpaceX in space tourism too.

THREE-DAY TRIP AROUND THE EARTH’S ORBIT

Earlier this year, a Crew Dragon capsule took an all-civilian mission on a three-day trip around the Earth’s orbit in a historic first.

Although those companies’ flights do not go into orbit, they offer several minutes in zero gravity without requiring months of training and at a significantly lower cost.