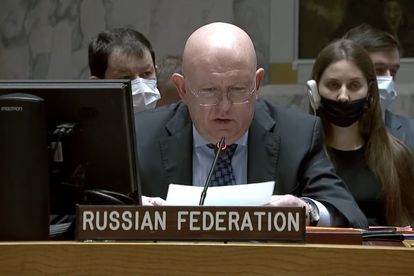 The Russian envoy to the UN speaking at the UNSC emergency meeting on Friday, 4 March. Photo: Screenshot from video.

The Russian envoy to the UN speaking at the UNSC emergency meeting on Friday, 4 March. Photo: Screenshot from video.

Russia has reportedly passed a draft law that seeks to punish those who share false news about the ongoing “military operation” in Ukraine.

According to Russian news outlet, Kommersant, the rule provides for punishment up to three years in prison for public dissemination under the guise of reliable reports of knowingly false information about the use of the Russian Federation Armed Forces “in order to protect the interests of Russia and its citizens, maintain international peace and security.

The law would also punish those who support sanctions against Russia or call for Putin to end the attack in Ukraine,

Such actions will be punished by a fine of 3 million to 5 million rubles (up to $45 000) or imprisonment for a term of five to ten years. If the actions entail serious consequences, then the term of imprisonment will be from 10 to 15 years.

On Friday, 4 March the BBC announced that it will with draw its journalists from the Russian Federation.

BBC Director-General Tim Davie said the proposed legislation appears to criminalise independent journalism. He feels that it forces the British broadcaster’s hand and leaves it with no choice but to pull its reporters from the country.

The work of BBC News journalists and their support staff is temporarily suspended while the corporation assesses the “full implications of this unwelcome development.”

Davie said the news service would continue to operate from outside Russia’s borders.

“The safety of our staff is paramount and we are not prepared t expose them to the risk of criminal prosecution simply for doing their jobs.

“I’d like to pay tribute to all of them, for their bravery, determination and professionalism,” said the Director-General.