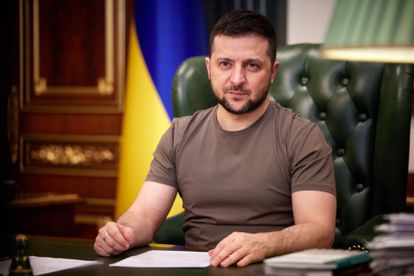 When rallying British MPs, Ukrainian President Volodymyr Zelensky reaches for Churchill. When addressing the US Congress, he invokes Pearl Harbor. When beamed into the Bundestag, he conjures the threat of a new Wall in Europe.

Zelensky has won standing ovations in parliaments across the West with a series of impassioned addresses from wartime Kyiv tailored to each audience.

We look back at the standout moments in his virtual world tour, ahead of his speeches to French and Japanese lawmakers on Wednesday.

On March 1, less than a week into the war, a haggard-looking Zelensky addresses the European Parliament.

The 44-year-old former TV actor frames the fight against Russia as a struggle to defend the European ideals for which Ukrainians staged two revolutions in the past two decades.

“Prove you are with us,” he tells MEPs. “Prove you are not abandoning us and you are really Europeans,” he says, a day after requesting fast-track EU membership for Ukraine.

‘We will fight on the shores’

On March 8, as the number of Ukrainians fleeing the fighting tops two million, Zelensky invokes the wartime defiance of British prime minister Winston Churchill in pledging a fight to the end.

“We will fight in the forests, in the fields, on the shores, in the streets,” he tells the UK’s House of Commons, echoing Churchill’s historic “We shall fight on the beaches” speech in the face of Nazi German advances in June 1940.

On March 15, as residential neighbourhoods in Kyiv come under attack, he asks MPs in Canada, the country with the world’s second-largest Ukrainian diaspora, to imagine their cities and children being bombed.

On March 16, Zelensky brings members of the US Congress to their feet with a rousing speech comparing the bombardment of Ukrainian cities to the attack on Pearl Harbor that drew the United States into World War II.

As Ukraine mourns 10 people killed queueing for bread in the city of Chernihiv, Zelensky likens the Russian invasion to the September 11, 2001 terror attacks in the US, “when evil tried to turn your cities… into battlefields”.

‘Tear down this Wall’

One of Zelensky’s most powerful speeches is to MPs in German on March 17, as reports emerge that a theatre accommodating hundreds of civilians in Mariupol has been reduced to rubble.

Zelensky warns that Russia is erecting a new “Wall” in Europe between “freedom and bondage” and calls on German Chancellor Olaf Scholz to tear it down, echoing US President Ronald Reagan’s 1987 appeal to Soviet leader Mikhail Gorbachev.

After hitting the right notes with his European and US audiences, Zelensky, who is Jewish, draws criticism in Israel after a speech to the Knesset on March 20 comparing the Russian invasion to the Holocaust.

Urging Israel, which has not joined in Western sanctions against Russia, to step up for Ukraine, he declares: “Ukraine made the choice to save Jews 80 years ago.”

He is rebuked by Israel’s Communications Minister Yoaz Hendel, who notes that part of the genocide of Europe’s Jews took place in Ukraine.

READ: Ukraine in talks with US: Calls for nation to supply fighter jets

On March 22, Zelensky tells lawmakers in Italy, long a top holiday destination for rich Russians, to stop being a playground for Russia’s elite.

“Don’t be the place that welcomes these people,” he urges.

“We must freeze them all: freeze their properties, their accounts, their yachts, from Scheherazade to the smallest,” he says referring to a mega yacht docked on the Tuscan coast.