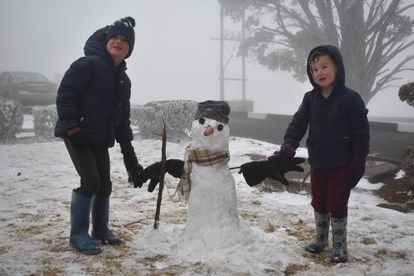 South Africa experienced snowfall for the third time in the space of two months, and people couldn’t wait to get outside and start playing.

Several parts of the country had snowfall by Friday evening, and the chilly weather has crept in.

The  South African Weather Services (SAWS) has issued warnings for snowfall over the high lying areas of the Eastern Cape, the extreme western and south-western high ground of KZN (Drakensberg areas), and the extreme eastern parts of the Free state from Thursday.

Nadine Clark and her family headed up to Witsieshoek, about 45 min from Harrismith.

“It is snowing beautifully here.”

Clark and her family were having a ball of a time in the snow on Friday. They have built a snowman and had a snowball fight.

Do you want to see some snow? Click here other places in the country that have had snowfall so far.

“Widespread rainfall of 15 to 35mm is expected over the southern parts of the Western Cape and the south-western parts of the Eastern Cape. 24-hour accumulated rainfall of up to 40 to 50mm is also likely along coastal and adjacent mountainous regions of the eastern Garden Route District of the Western Cape and the south coast and adjacent interior of the Eastern Cape which may result in localised flooding of susceptible areas and roads.”

The SAWS has issued several warnings for the coming weekend.

Hlomuka urged residents across KwaZulu-Natal on Friday to exercise extreme caution as weather conditions are expected to deteriorate due to an incoming cold front.

These weather conditions may affect road conditions and the flow of traffic, causing congestion and delays, and the possible closure of sections of the N3 Toll Route in the interest of safety.

Extra care should be taken when driving in this weather.

ALSO READ: How to drive in strong winds

The SAWS have urged farmers and the public to take care of their pets and livestock outside. Please ensure that they are protected from these severe weather conditions.