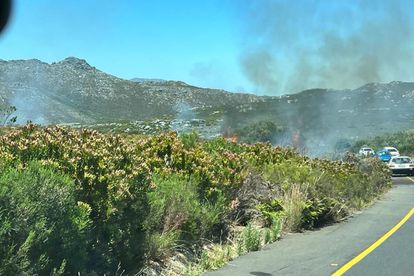 With temperatures reaching well over 40 degrees celsius, the Western Cape is going through one absolute scorcher of a weekend. With temperatures of 38c in the Mother City alone, it was only a matter of time before another Cape Town fire broke out. Silvermine and mountain pass Ou Kaapse Weg have been closed after several fires caught alight towards the Noordhoek side.

The City of Cape Town has confirmed the reports of a mountain fire in the vicinity of Ou Kaapse Weg Silvermine.
As a result, Ou Kaapse Weg is closed in both directions. Between Steenberg road and Silvermine road Noordehoek. Motorists have been advised by the city to use Old Boyes Drive or Main road as an alternative route.

Table Mountain National Park has confirmed that visitors inside Silvermine are being evacuated as a safety precaution. Several firefighting units and even water-bombing helicopters have also been called in to deal with the fires.

Working on Fire Western Cape has dispatched “four aerial resources including the Black Hawk helicopter”. And a team to assist the SANParks Table Mountain group with suppression efforts of the Silvermine fire

The last update from Table Mountain National Park shortly after 13:30, revealed that seven fires have been contained. However, the situation is still “very volatile”.