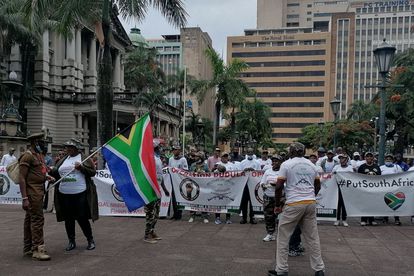 Hundreds of people made the decision to brace a day of chilling winds and seemingly endless downpours in Durban to mark the launch of Operation Dudula in KwaZulu-Natal on Sunday 9 April – Photo: Twitter

Hundreds of people made the decision to brace a day of chilling winds and seemingly endless downpours in Durban to mark the launch of Operation Dudula in KwaZulu-Natal on Sunday 9 April – Photo: Twitter

The polarising campaign called Operation Dudula has grasped the nation with its anti-illegal immigrant rhetoric – some are bolstered to join ranks while others like refugees are instilled with fear. The movement took to the streets of eThekwini on Sunday to launch its KwaZulu-Natal wing.

Hundreds of people made the decision to brace a day of chilling winds and seemingly endless downpours in Durban to mark the launch of Operation Dudula in KwaZulu-Natal on Sunday.

It began at Durban City Hall and proceeded to Point Road police station.

Operation Dudula is a movement of people who travel in small groups that close down foreign-owned businesses by force. It originated in Johannesburg where action has already taken place in townships and the city centre.

Dan Radebe, deputy chairperson of Operation Dudula, says work begins on Monday as members will work with the Department of Home Affairs to identify and deport undocumented foreign nationals.

A heavy police presence accompanied the demonstrators. The march was greenlit by eThekwini Municipality on Friday and police have been gearing up since.

Officers on the scene say the goal is to prevent “what happened in Johannesburg”.

The comment is made on the backdrop of the tumultuous terrain of Diepsloot where foreign nationals and Operation Dudula has clashed over the past week.

NOT ALL IMMIGRANTS ARE ILLEGAL

Elvis Nyathi was allegedly burned alive on Wednesday evening. Nyathi was Zimbabwean but lived and worked in Diepsloot before he met his demise at the hands of an angry mob.

The group of residents were supposedly making rounds in the area requesting to see passports to determine the nationality of people in the neighbourhood.

Eric Jean Madel from the Africa Refugee Social Cooperation says the atmosphere in Durban is fear-filled.

Refugees and foreign nationals believe the problem began in 2008 during the early bouts of xenophobic outbursts up to now in 2022 when business owners are ransacked, people beaten and in the worst-case scenario killed.