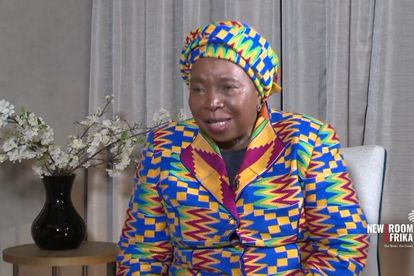 ANC NEC member Dr Nkosazana Dlamini-Zuma’s political credentials and ambitions have nothing to do with her ex-husband, former president Jacob Zuma – and she wants to make that clear. Dlamini-Zuma, who is the current Co-operative Governance and Traditional Affairs (COGTA) minister, is on yet another bid to become ANC president.

Dlamini-Zuma narrowly lost to President Cyril Ramaphosa at the ANC’s last elective conference in 2017, and even then, many questioned her intentions and Msholozi’s possible role and influence. Similar sentiments are being expressed after she essentially launched yet another campaign for the top post at Luthuli House – and this time, she intends setting the record straight.

In an interview with Newzroom Afrika, Nkosazana Dlamini-Zuma was asked by the news channel’s Ziyanda Ngcobo if her bid for the ANC presidency was merely fronting for former president Jacob Zuma – and boy did she not like that question.

“I think that’s insulting and I take exception to that. Let me tell you, I started getting involved as an activist in my student days and I was a member of the South African Student Organisation and I rose within the ranks of that organisation … I joined the ANC before I got married and I was a member of the ANC. So what you are saying is very sexist because nobody has asked these men about any of their relationships”

Dlamini-Zuma also called out the media for constantly associating her with Zuma. They were married between 1982 and 1998 and share four children – Msholozi, Gugulethu, Nokuthula and Thuthukile.