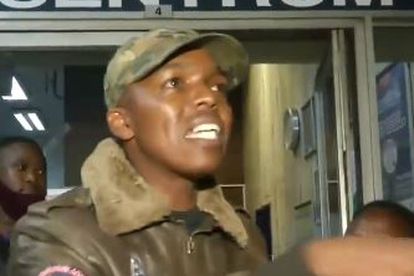 He is dividing opinion like few other South Africans at the moment. Nhlanhla Lux, the man behind the Operation Dudula movement, has had his urgent bail request denied.

Lux has been detained at the Johannesburg Central Police station since his arrest on Thursday evening. He faces charges of housebreaking, theft and malicious damage to property.

A case was opened against Lux by EFF members in Dobsonville on Wednesday.

Lux allegedly led a raid on a house belonging to an EFF member. Lux and Operation Dudula insist that the house they raided belonged to a drug dealer. The EFF denies this.

Lux’s legal team insists that his arrest is politically motivated. They point to the fact that despite the case against him being opened in Dobsonville, police have detained Lux at Johannesburg central.

Lux’s legal team applied for police bail on Saturday afternoon, after Lux took part in an identity parade. Police then denied the request for bail.

Lux will get another chance at bail when he appears at the Roodepoort Magistrates Court on Monday.

What’s the fuss about Operation Dudula?

Operation Dudula has received heavy criticism for allegedly fanning the flames of xenophobia in the country. The group says it is taking a stand against illegal immigration, and the crime that plagues South Africa as a result.

While the EFF and Operation Dudula members have clashed, Dudula has also attracted some support.

Operation Dudula had been set to take their work to Durban this weekend.

With the Durban operations now “delayed” according to Lux’s associates, anti-xenophobia protesters also made their voices heard in the Joburg CBD.

The Kopanang Africa Against Xenophobia group led a protest march across Johannesburg. As other groups joined its march, some tensions with the EFF boiled over. Some Operation Dudula protesters set fire to an EFF flag.