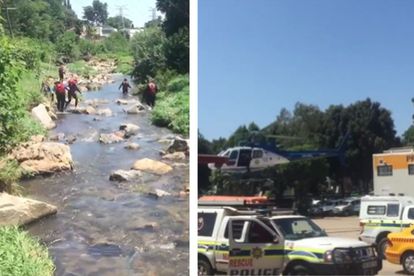 Two people have drowned and several others are missing after being swept away in the Jukskei River. Image: Video screenshot @RobertMulaudzi Twitter

Two people have drowned and several others are missing after being swept away in the Jukskei River. Image: Video screenshot @RobertMulaudzi Twitter

Two people have drowned and 15 others are missing after they have been swept away along the Jukskei River stream on Saturday, 3 December 2022.

This after it was called off on Saturday night.

Mulaudzi stated that the group was performing a baptism at the time of the incident.

A briefing session was held at the Sandton Fire Station before the search started.

Two dead and multiple others missing after being swept away

Mulaudzi told The Citizen that around 33 church members were attending a baptism ritual along the stream.

A storm then caused water levels to rise suddenly.

He further confirmed to the publication that one congregant was rescued, two others drowned and multiple others managed to make it back to safety.

Religious ceremonies such as baptisms are usually high during the festive season, however water levels are high, making this dangerous.

Mulaudzi encouraged those participating in these religious events to have safety measures in place.