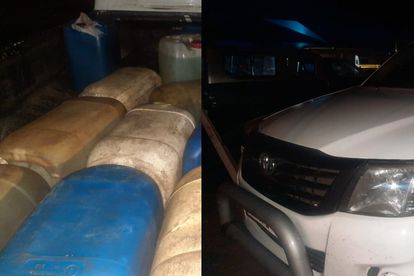 This during routine patrols conducted by Middleburg police.

Middelburg police officers from the Crime Prevention Unit were patrolling at Vaalbank Village, near the Black Watlo mine outside Middleburg.

Here they spotted a suspicious vehicle, a white Toyota Hilux, with three men inside.

The vehicle was stopped, and a search was conducted, during which 25-litre containers of diesel were discovered inside the vehicle.

There were a total of 24 containers discovered.

According to reports, none of the three men could provide proof of purchase or a clear explanation of who owned the fuel they were transporting, so they were all arrested.

Both the diesel and the vehicle were seized for further investigation.

The suspects appeared in the Middleburg Magistrate’s Court on Friday, 2 December, on charges of possession of the suspected stolen property.

Their case was adjourned until Friday, 6 December, for a formal bail application; the three were remanded in custody in the meantime.

The three suspects are as follows:

Police are working with the Department of Home Affairs to determine their legal status in the country.

“The Provincial Commissioner of the SAPS in Mpumalanga, Lieutenant General Semakaleng Daphney Manamela is delighted about the commitment displayed by the members.” A statement read.

Manamela also stated that police will remain vigilant and will prosecute anyone who chooses to be on the wrong side of the law.