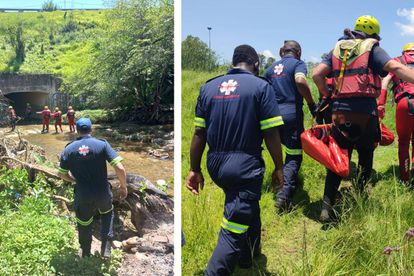 The death toll in the Jukskei River drownings has increased to 14 after 12 more bodies were found. Image: Medi Response Facebook page.

The death toll in the Jukskei River drownings has increased to 14 after 12 more bodies were found. Image: Medi Response Facebook page.

Search and rescue operations continue on Monday, 5 December after several people drowned when swept away in the Jukskei river.

It is now reported that at least 18 people from various churches were swept away in flash floods when taking part in a baptism.

Netcare 911 notified the National Sea Rescue Institute (NSRI) of the drownings around 16:30 on 3 December.

The following emergency services responded to the scene:

During the initial search, Fire and Rescue Services found a woman where NSRI rescue swimmers and Police divers recovered the body on a sandbank in the Jukskei River at the Grayston Drive Bridge on Katherine Street.

Another adult woman was found by Fire and Rescue Services near Arkwright Avenue and was transported to hospital in a stable condition suffering hypothermia.

Several other bodies found after drowning – some children

NSRI was notified that emergency services had discovered and recovered the body of a teenage girl and that the body had been turned over to Government Health Forensic Pathology Services.

A Fidelity Security helicopter, with thermal imaging sensors, joined in the search.

On Sunday, 4 December the following bodies were found:

Search and rescue operations will continue on Monday, 5 December.