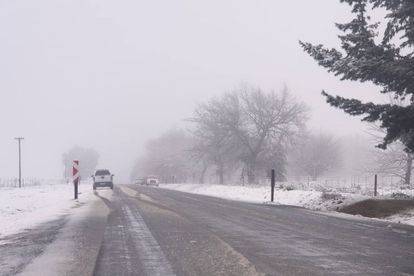 Snow is expected to fall over the high-lying areas of the Western Cape, Eastern Cape and Drakensberg this week, with minimum temperatures below zero in the country’s inland regions.

Meanwhile, snow fell in the Matroosberg Private Nature Reserve – located two hours outside Cape Town on the Erfdeel farm – on Monday afternoon, 12 July. The Reserve had predicted that the cold front currently engulfing the Cape provinces would bring the first “decent snow of 2021”

WHERE WILL THE SNOW FALL THIS WEEK?

Storm Report South Africa said weather models have been quite consistent over the last few days and they feel confident and positive that snow will indeed fall in at least 5 provinces from Tuesday, 20 July. However, forecasts may change.

“Today weather models are suggesting more snow in the target areas with models suggesting snowfall over 30cm over the Western Cape mountain ranges. Snowfall is expected to start Tuesday afternoon and last until at least Friday.”

Storm Report SA added that an in-depth analysis will be done closer to the time where exact snowfall amounts and areas will be discussed.

TimesLIVE reported that the weather service would issue a yellow warning on Monday for residents along the Garden Route, where downpours could lead to flooding.

SA Weather Service forecasters said on Sunday that the south coast of SA would get a taste of things to come on Monday when they felt the cold shoulder of a winter cold front brushing by the southern edge of the country.

“Residents of Gauteng, the Northern Cape and Free State can expect maximum temperatures of 10 to 12 °C from Wednesday night accompanied by an icy south-easterly wind and clear skies,” a forecaster said.

Snow was spotted in some of the Cape provinces this week. Check out some of the pictures below: