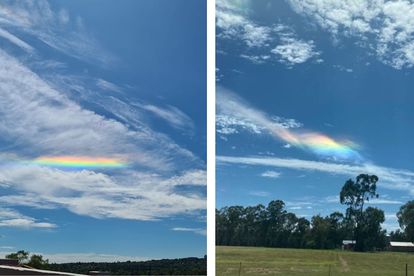 Residents of Gauteng were treated to a special surprise on 7 December when a rainbow cloud was spotted in several areas.

Photos of this phenomenon were widely shared on social media, and many people were ecstatic to see such a rare beauty.

What are rainbow clouds?

A rainbow cloud can form because of a phenomenon known as cloud iridescence.

It most commonly occurs in altocumulus, cirrocumulus, lenticular, and cirrus clouds. Iridescent clouds form because of diffraction, which occurs when small water droplets or ice crystals scatter the sun’s light.

This is a rare phenomenon.

For this to happen, clouds must be thin and contain many small water droplets or ice crystals.

When this happens the sun’s rays only collide with a few droplets at a time.

Because of this, semi-transparent or newly formed clouds are likely to have iridescence.

Many people are unaware that, aside from the typical rainbow seen after a rainstorm, there are numerous other types of rainbows.