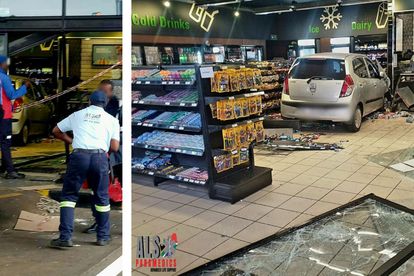 Several people were left injured when a car crashed into a convenience store at a petrol station in KwaZulu-Natal on 3 December 2022, a post on ALS Paramedics Medical Services’ Facebook page said.

A serious accident occurred just after 7:30 on Saturday.

This happened at a popular convenience store at a local Petrol station near the Pavilion Centre in Westville.

When ALS paramedics arrived on the scene, they found total chaos.

The vehicle crashed through the shop front, injuring multiple employees.

The driver of the vehicle, as well as four employees, suffered injuries ranging from moderate to serious.

They were stabilized on the scene before being transported to a nearby hospital for further care.

The South African Police Service (SAPS) was on the scene and will be investigating further.

Several other accidents reported in the province

A 26-year-old man was critically injured after a crash on the M41 in the Umhlanga Ridge are on 3 December.

When Emer-G-Med paramedics arrived on the scene, they discovered that a light vehicle had left the road and crashed into a tree.

The only occupant, the driver, was found critically injured and trapped in the wreckage.

Emer-G-Med and Netcare911 advanced life support paramedics worked tirelessly to stabilize him while the Jaws-of-life were used to cut him free.

In another incident, Medi Response was dispatched to the M4 near the Engen robots in Ballito after receiving reports of an accident.

When paramedics arrived, they discovered that a vehicle had hit a pedestrian, causing critical injuries.

Despite advanced life support interventions, the pedestrian died as a result of their injuries.