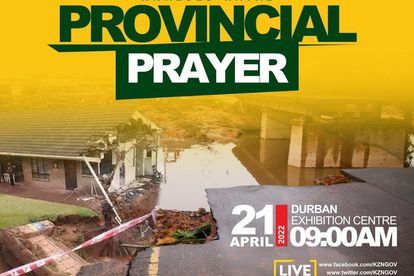 KZN Premier Sihle Zikalala says Thursday will be a provincial day of prayer as a result of the aftermath of the floods. Photo: Supplied/KZN Government

KZN Premier Sihle Zikalala says Thursday will be a provincial day of prayer as a result of the aftermath of the floods. Photo: Supplied/KZN Government

Although the heavy showers have passed, KZN continues to struggle with the aftermath of the floods. Many remain without a roof over their heads, empty bellies, and access to either electricity or water. This has prompted the local government to turn to religion. A day of prayer will be held on Thursday morning.

KZN Premier Sihle Zikalala made the announcement on Wednesday morning.

“As a mark of respect for all victims who lost their lives in the recent flood disasters in KZN, the province will on Thursday hold a Provincial Day of Prayer to show solidarity with the bereaved families and to pray for those who have passed away,”

The details shared by the local government team reveal that the prayer day will begin on their end at 9 am at the Durban Exhibition Centre in the city’s central business district.

Zikalala went on to further urge all faith-based organisations and citizens to take the time out of their busy schedules to say a little prayer.

“Wherever you are, please take a moment to pray for the victims of the KZN floods and for healing across the province,”

As a result of the floods, KZN residents are left mourning their old lives while they search for missing loved ones. Zikalala says the death toll, as of Wednesday morning, sat at 448.

“The disaster has been described as unprecidented and one of the worst in living memory. Some people are still missing and others are being accommodated in temporary shelters. The prayer is for us to call an end to tragedies and for us to regain our strength in KZN,”