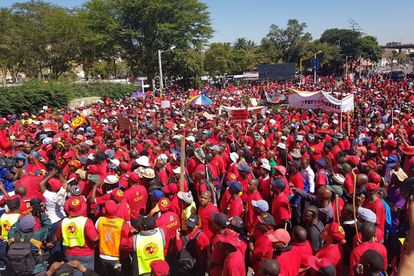 Unlike some of the more recent threats for a National Shutdown, the latest one being planned now has immense support from some of South Africa’s largest unions – and almost a million members could soon be leading a campaign that brings South Africa to a standstill.

When will the next National Shutdown happen?

In the past few weeks, we have seen acts of dissent that are loosely linked to the National Shutdown movement. Highway blockades and trucking protests have caused significant disruption, but ultimately, the campaign failed to gain traction countrywide.

That could all change within the next few days, though…

We have agreed to convene the WCS with the participation of all left-leaning political parties to adopt a mobilisation plan, one that will not be a once-off event but a process to reclaim power in our communities.. @EFFSouthAfrica @SRWPSouthAfrica @MyPAConline#NationalShutdown pic.twitter.com/zFzKBt7K7t

Why are unions pushing for a National Shutdown?

The SA Federation of Trade Unions (SAFTU) held a press conference on Thursday, confirming its support for demonstrations that constitute a National Shutdown. Should their 800 000 members take part, Mzansi would find itself in a very precarious position.

The Food and Allied Workers Union (FAWU) have also registered their support, and would team-up with SAFTU to lead a series of protests against load shedding, rising fuel prices, and worsening unemployment rates – just to name a few of their grievances.

“We cannot allow our country to be at the doorstep of a failed state as we have seen in Zimbabwe and other countries. As I speak to you now we are load shed. We get load shedding three to four times a day.”

“We are losing our country and if we don’t stand up now and start a process of unifying, all those who disagree with this path that has been travelled for the past 28 years, we will follow Zimbabwe.”

Speaking on Thursday, SAFTU made their demands clear. They believe that the current cost of living crisis, which is pushing millions of South Africans to the brink, can be alleviated by the introduction of a Basic Income Grant. Without this, they say that the country is ‘doomed to fail’.

“The rising costs of living are rendering the minimum wage inadequate. The costs of household food basket is up to R4 688. SAFTU reiterates its demand for a Basic Income Grant (BIG) of R1 500 that is R150 above the upper-bound poverty line.”

“We believe that the BIG will in turn have positive multiplier effects in the economy by boosting demand and production, while relieving poverty among the unemployed – #NationalShutdown”