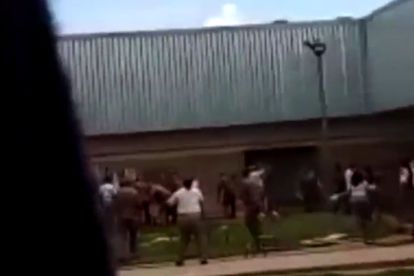 Disturbing video of what is believed to be the fight which broke out at a prison in Mthatha, Eastern Cape, has found its way to social media, a day after the Department of Correctional Service confirmed the incident.

One inmate who was involved in the brawl, while two others – a correctional services official and fellow prisoner, have been severely injured and are being treated in hospital. The deceased inmate was reportedly part of a group of five inmates who attacked four other inmates and even prison officials during an exercise session at the Mthatha Correctional Centre on Tuesday afternoon, 11 January 2022.

“DCS can confirm an incident where five offenders attacked officials and four other inmates during an exercise session around midday on Tuesday at the Mthatha Correctional Centre, Eastern Cape region,” said Department spokesperson Singabakho Nxumalo at the time.

The circumstances surrounding how the violence even started remain unclear at this point, but prisons have been known to be violent as tensions between rival gangs tend to flare up, sometimes with deadly consequences.

“Unfortunately, one inmate from the five attackers succumbed to his injuries and passed on during the fracas. One official and another inmate remain in hospital due to the seriousness of the injuries sustained,” Nxumalo said.

In the wake of the prison fight, the Department of Correctional Service said the facility in Mthatha would be on high alert. Officials are carefully monitoring activities in the prison, to avoid another fight, as tensions could still be high.

For now, the department says the prison fight is being investigated – both internally and by the South African Police Service (SAPS).

“The Judicial Inspectorate for Correctional Services has also been informed and is expected to run its own independent investigation. It is the outcome of the investigation which will shed more light on the motive and circumstances that may have triggered this incident”