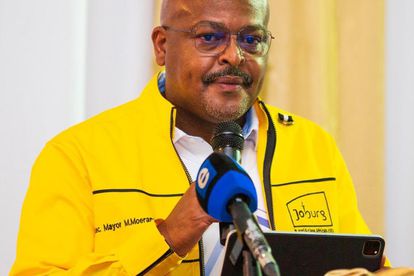 The spokesperson for the family of former Johannesburg Mayor Mpho Moerane says they have been left devastated by his passing.

Moerane died on Wednesday, 18 May 2022, more than a week after being involved in a serious car accident. He had been admitted to Milpark Hospital, where he remained unconscious and in critical condition.

“He sadly did not respond positively to treatment and with heavy hearts and deep sorrow, we confirm that we lost our beloved Mpho this afternoon. His passing has deeply pained us; let me add that he was certified dead 5.54pm,” said the Moerane family’s spokesperson Mike Maile at a press briefing.

Moerane also highlighted that Mpho Moerane’s family bemoaned the fact that they had to dismiss reports claiming he had succumbed to his injuries, while he was still alive.

“It is unfortunate that Mpho was killed many times before being certified dead by those qualified to do so. I do not know or understand why people continued spreading rumours despite us telling them Mpho was still alive. I do not understand and will never understand. It traumatised the family. I hope the abuse of social media stops. You cannot post unverified information”

Despite being political rivals, current Joburg Mayor Mpho Moerane says she considered him a friend and that he will always have a special place in her heart.

“Councillor Moerane, although seated across the aisle of council, was always eager to engage on the development of the city, and on how we as leaders in Johannesburg could collectively work to serve the interests of residents, because, before all else, we are servants of the people and not just party political representatives,” Phalatse said.

She has further expressed condolences to Moerane’s family and his political home, the ANC.