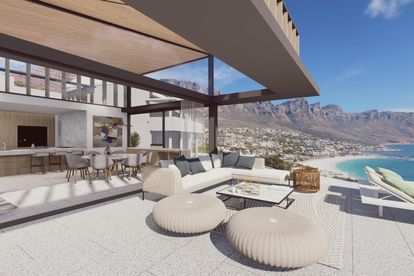 Yeah, sure. Let’s just see if we’ve dropped R230 million behind the couch and we’ll get back to you. That’s the jaw-dropping amount needed to secure this Clifton-based mansion – further confirming that the Cape Town property market is an untameable beast.

A sprawling mansion in one of South Africa’s richest neighbourhoods is now on the market. The ‘Sky Is The Limit’ complex overlooks the wondrous Camps Bay, offering unrivalled views and an idyllic location. The real estate agents at Re/Max are definitely sat on a goldmine here.

The project is led by a ‘world-beating architectural firm’, putting modern living and sustainability at the forefront of its designs. Now, when you’re forking out the equivalent of $13 million, you expect a few luxuries from a property. My word, does this dwelling deliver…

“SAOTA, one of the world’s leading architectural firms, has combined an incredible vision with an ingenious design to create an ultra-modern development with understated elegance, exclusivity and privacy.”

“Perched against the slopes of Lion’s Head in one of the most sought-after locations in Cape Town, this development consists of both a penthouse AND a villa. There’s also an expansive deck with an infinity pool, which adds to the luxury it exudes.”

“You can enjoy world class views from here. The lighting is great, and the building is wind-protected. It is an easy walking distance to Clifton’s famous beaches – Camps Bay and Table Mountain National Park can also be reached on foot.” | Re/Max properties

Thinking of buying the most expensive house in the country? Here’s where your money goes

For those who are in a position to put a bid in, you get a lot of bang for your buck. Clifton is one of the most sought-after suburbs on the African continent. Not only will you be at the heart of Cape Town’s vibrant social scene, but your home comforts are beyond impressive…

So, what’s the catch?

Well, the eager beavers amongst us already reaching for their chequebooks should note that the construction of this home won’t be completed ‘for another 18 months’. That means your move-in date will be mid-2024. There’s a reason all these images are computer-generated, you know.

Still, if this is the property of your dreams, it could well be worth the wait!

“This development comes with two units (the penthouse and the villa). Set to be completed in 18 months, there is still an opportunity to acquire both these units should you wish to combine them as one large villa. A planned proposal is available on request.” | Re/Max Properties