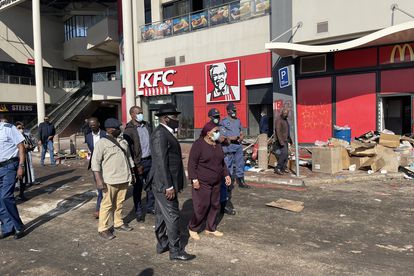 A team of 10 detectives and 80 public order police officers have been assembled to investigate the deaths of 20 people killed in Phoenix, northwest of Durban.

Police Ministry Spokesperson Lirandzu Themba said Minister Bheki Cele embarked on a series of community engagements on Saturday 17 July 2021 to address the killing of the twenty people and ongoing violence.

“The interaction with community members laid bare claims of racial tension; vigilantee acts, the role of some private security companies as well as policing shortcomings being some of the elements fuelling the instability in the area.”

Cele has urged Phoenix residents not to allow criminal elements to highjack their efforts of trying to protect themselves.

“Residents have the right to defend themselves within the law, but if we hear that people are racially profiled at roadblocks set up in the area, were people trying to access Phoenix, including police, are being intimidated, violated and in extreme cases people are being beaten up, and their cars are searched and torched is simply criminal and won’t be tolerated.

“Police will not negotiate with criminals. Those who commit these criminal acts will be found and dealt with, regardless of who they are and where they come from.”

Cele said the team of 10 detectives had been assembled to investigate the deaths of 20 people, killed during the failed insurrection that saw mass looting and violence in Gauteng and KwaZulu-Natal.

Furthermore, the 80 public order police officers have been deployed to assist local police and work together with members of the South African National Defence Force, to keep all residents and property safe.

“The team of investigators will also focus their work on the alleged involvement of the local SAPS members and private security companies in the violence in the area.”

Cele urged residents of Phoenix and neighbouring settlements of Bhambayi, Umaoti, and Zwelisha, to form a community grouping that works with the South African Police Service at district level, to rebuild the broken community relations and bring about peace and social cohesion.

“The District Commissioner of the area has been tasked to assemble a ‘Peace Committee’; made up of community representatives who will work towards addressing racial tensions and crime challenges in Phoenix and neighbouring settlements.”

Step aside, Musa: Man with 15 wives is ‘too smart’ for ONE partner