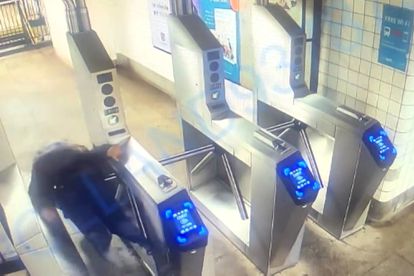 A man has died after breaking his neck while trying to jump over a turnstile. According to police in New York, 28-year-old Christopher De La Cruz made several attempts to hop over the barrier at a subway station in Queens on Sunday, 2 January 2022.

All indications are the man’s death was a freak accident, but law enforcement authorities say they’ll be investigating the matter anyway.

Man’s death still to be investigated

Shocking video of his last moments shows him trying to jump over a turnstile, but he initially falls and appears to drop his phone. He gets up and tries again, several times before his final attempt – flipping over the turnstile onto his head and breaking his neck in the process. Please be warned that the contents of the clip are rather disturbing and not for sensetive readers.

Police say De La Cruz was “attempting to evade the fare,” which amounts to $2.75 (a little over R43,00), when he fell to his death. Both police and medical personnel were called to the scene, and found him lying unconscious on the concrete floor. They believe that De La Cruz was intoxicated at the time.

He was pronounced dead at the scene. While they believe he died after breaking his neck, an autopsy will be conducted on him.

According to Daily News, his father is devastated by the news.

“What can I say? He did a mistake. He was a nice guy. He was a good father” he is quoted as having told the publication.

De La Cruz was also the father of a four-year-old boy. The clip prompted a wave of reaction on social media.

“It’s never that hard to jump a turnstile, so clearly he was intoxicated. Sad af way to go out man. He should’ve thrown his bag over first, that’s what threw his weight off as soon as his body went over,” on Twitter user wrote.