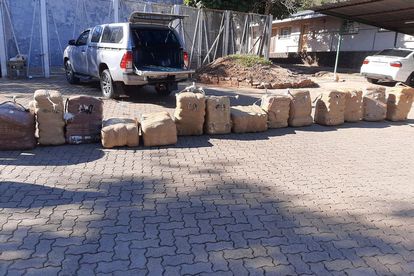 A 38-year-old man is expected to appear before the Low’s Creek Magistrates’ Court today, Thursday 22 July 2021, after he was caught in possession of dagga valued at R1 Million.

19 BAGS WHICH WERE LOADED WITH DAGGA WEIGHING ABOUT 341,7 KG WERE FOUND

Brigadier Leonard Hlathi said the man was arrested during an Intelligence Driven Operation conducted at Low’s Creek on 21 July 2021.

“According to the report, members from the unit gathered information about a grey Toyota single cab bakkie with one occupant near Low’s Creek involved in an illicit activity.

“They then mobilised police on duty who spotted the said vehicle, stopped it for a search and they discovered 19 bags which were loaded with dagga weighing about 341,7 kilograms.”

The man was immediately arrested and charged accordingly.

‘Police also confiscated the vehicle as it was used in the commission of the crime. A preliminary investigation has since revealed that the suspect is from the Kingdom of Eswatini.

“And apart from the dealing in dagga charge, police indicated that there are possibilities that the suspect may face more charges relating to being in the country illegally.”

Hlathi said in another breakthrough; police continue to make their presence felt in the borders with an aim to ensure that citizens live in a safe environment.

“This comes after members conducted operations at Oshoek Ports Of Entry on Monday, 19 July 2021, where they arrested two suspects in possession of dagga.

“One has hidden his dagga with an estimated street value of R96 814.00 under a trailer of the truck he was driving. The truck, as well as its trailer, were not spared but were seized as they were reportedly used in the commission of crime.”

He said the one man is facing charges relating to dealing in dagga while the other man was found in possession of dagga weighing about 3 kilograms to an estimated street value of about R4 500.00 and a television set valued at about R7000.

“Police also found abandoned dagga with an estimated street value of about R4 540.00.”