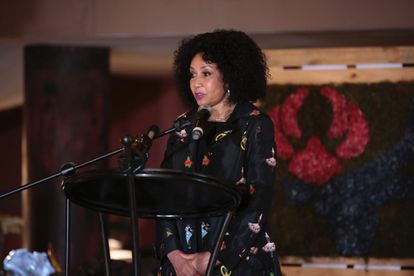 Tourism Minister Lindiwe Sisulu has stated that she may have access to a potentially life-saving cancer treatment – but there’s a snag. According to the senior ANC representative, the so-called ‘new medicine’ is stored IN HER HEAD.

Now, this is a very loaded term used by Minister Sisulu. Speaking to the Weekend Argus, the ruling party stalwart explained that she came across a new treatment while visiting Russia, believing it could have been used to medicate Jessie Duarte – the ANC ‘Top Sixer’ who died just a few days ago.

Shortly after Duarte had passed on, Lindiwe Sisulu mentioned to the media that she had found an effective cancer treatment that could be used in SA. This sparked a wave of confusion amongst health professionals, but the polarising politician has clarified her position.

‘I am a specialist’ – Lindiwe Sisulu stands her ground

Lindiwe Sisulu, brazenly referring to herself as a ‘cancer specialist’, explained that she recently visited a facility in Russia that used nuclear tech to fight the disease. She stated that a new medicine from this centre could have been used on Duarte – but the process is still ‘in her head’.

And, for those who are struggling to see eye-to-eye with Sisulu, she has a message to deliver: You can go to hell…

“I had cancer, my brother had cancer, my husband passed away from cancer, so I wanted to go and learn and I have found a new treatment. I did not put it in my pocket, it’s in my head. I brought in my mind a new medicine that we could try on Jessie Duarte.”

“I didn’t put it in my bag as it’s administered by doctors. They have an excellent facility in Russia, all based on nuclear. I’m a cancer specialist myself, so I needed verification of the effects. I wanted to refer Jessie there, anyone who misinterprets it can go to hell.”

Naturally, the SA Health Products Regulatory Authority (SAHPRA) have got some questions. They’ve already made contact with Sisulu and her office, reminding her that NO INDIVIDUAL can order medicine from abroad unless prior authorisation is given.

“SAHPRA has noted the numerous media articles on the statement made by minister Sisulu, having secured medicine for the late Jessie Duarte. To this effect, we are looking into the reports and engaging with the minister’s office.”

“It must be noted that there are numerous oncology medicines that are registered and are available in South Africa for a range of cancers. No person shall order any medicine from abroad for personal use, unless SAHPRA have granted the authorisation.”

SAHPRA further said: "No person shall order any medicine from abroad for personal use unless SAHPRA has granted the said person an authorisation in terms of section 21 of the Medicines Act.”