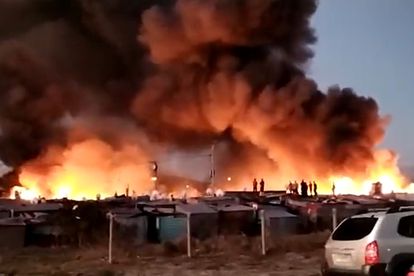 A fire rips through several shacks in the Langa township in Cape Town. Photo: Twitter @ZahidBadrodien

A fire rips through several shacks in the Langa township in Cape Town. Photo: Twitter @ZahidBadrodien

The City of Cape Town has activated its full disaster and rescue management team. A fire broke out early on Saturday evening in the Joe Slovo formal settlement of Langa. Within minutes, the blaze engulfed several shacks and quickly began to spread.

According to City of Cape Town Mayoral Committee Member for Water and Sanitation, Zahid Badrooidien, 12 fire engines are currently on the scene. Four water tankers are also being utilised. Law Enforcement and Traffic Services are in the area working with firefighters attempting to save lives and homes.

Badroodien says the fire was still “uncontrolled’ at 8PM on Saturday. No information as to the start of the fire has been made public yet.

Gift of The Givers team on standby

The fire was reported to City Fire and Rescue Services just before 6PM. According to aid group Gift of The Givers, it’s estimated that over 100 structures have burnt out.

The group says it has already been inundated with calls from members of the Langa community. It plans to enter the area with support as soon as the fire is brought under control.

With over 13 000 households affected by the brutal KZN floods, the City of Cape Town fire and rescue team is looking to play its part. The City has sent a highly trained group of technical rescuers, divers and medics to the province.

The Cape Town team has been split into three groups. Two groups dealing with two water rescues. The third team is assessing a structure that collapsed. A person is still trapped under the rubble.

On Saturday night, the teams will assess a mudslide where 20 bodies are believed to be buried. The team will then begin work attempting to dig out those bodies on Sunday.