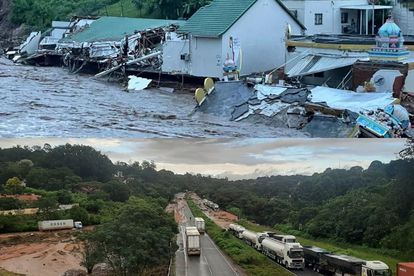 Missing loved ones and the homes that took lifetimes to build have been washed away in an instant after the fifth day of unrelenting heavy rains turned in KZN floods. While the provincial government has lunged into action they have called in for reinforcements from the South African National Defence Force (SANDF) on Tuesday.

Rescue efforts are underway and warnings have been issued by the authorities of KZN.

eThekwini Municipality’s Disaster Management Department is in full force with its command nexus, from the emergency call centre to dispatched task teams and a command team to handle the aftermath of the KZN floods

However, the province’s Cooperative Governance and Traditional Affairs (COGTA) Department is urging residents to stay off the roads and help neighbours.

COGTA spokesperson Senzelwe Mzila said the provincial disaster management centre has called in for reinforcements from the SANDF.

“They are going to provide aerial support where necessary for rescue efforts. Disaster management teams have been evacuating people in areas where they have experienced mudslides, floodings and structural collapses of buildings and roads during the KZN floods,”

ROADS CLOSED AS BRIDGES WASH AWAY AFTER KZN FLOODS

The eThekwini Municipality has provided a list of roads that have been closed due to the severe impact of the KZN floods. The torrential downpours in the province have devastated local infrastructure and people’s homes. Social media is littered with videos and images of destruction as well as media reports of bridges that have either collapsed or washed away.