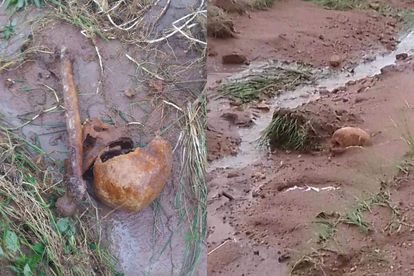 The KZN floods have brought human remains buried at the Ntuzuma cemetery to the surface. Photo: Twitter

The KZN floods have brought human remains buried at the Ntuzuma cemetery to the surface. Photo: Twitter

While most of the province awoke to the reality of destroyed homes and missing people after the unrelenting KZN floods, the community of Ntuzuma is reeling after human remains were exposed at their local cemetery.

The graves in Ntuzuma, north of Durban, are exposed due to the KZN floods. As the community walked the streets, they found skulls and partial skeletons lying by the wayside in a muddy deluge.

Many have taken to Twitter to spread the news of the human remains, a desecration of the peace the fallen citizens were allotted when they were buried.

One Twitter user who goes mononymously as Zizi, with the handle @lungak_, simply said the Ntuzuma Cemetery is washed away after the KZN floods.

Another user who goes by P Mpulo, with the handle @Philanmpulo, reiterated Zizi’s grim news about the KZN floods but accompanied the post with a gallery of three images.

The pictures revealed exposed skulls and bones covered in mud.

Meanwhile, another Tweep named Sphelele, @SpheDludla, shared a video of a person who went on a walkabout of the scene in Ntuzuma that was ravaged by the heavy downpours.

As the KZN floods are expected to continue, the chances of new wounds opening up old ones are to be expected to heed the warnings from the government and the South African Weather Services.

KZN FLOODS CAST DOWN THE WALLS OF A DURBAN MOSQUE

The Banu Hashim Mosque in the Morningside suburb of Durban was reduced to rubble on Monday in the aftermath of the KZN floods leaving the community distraught.

The rubble-filled Lady Bruce Road property that once served as a holy place and safe haven for those to worship now looked like an excavation site.

Residents poured in to offer assistance as it was learned that one person may be trapped under the rubble. A video was recorded of the devastation…READ MORE