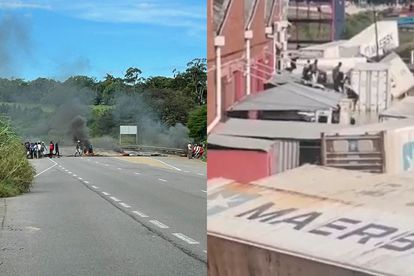 The KZN floods have left residents desperate and resorting to looting for supplies or protesting for better housing. Photos: Twitter and Facebook

The KZN floods have left residents desperate and resorting to looting for supplies or protesting for better housing. Photos: Twitter and Facebook

KwaZulu-Natal has been battered by torrential downpours, leaving citizens desperate and disgruntled. The floods have destroyed homes, left people searching for their loved ones and now there are reports of looting and protests.

DA WANT A HARD STANCE FROM THE POLICE

Andrew Whitfield, Democratic Alliance (DA) shadow minister of police, says he has received reports that looting is starting to take place from trucks and containers in areas that were devastated by the floods in KZN.

Images, videos and broadcast messages have started to circulate, harkening to the dread many experienced during the rampaging riots of the July Unrest last year

“These images are extremely disturbing. Especially since they are strongly reminiscent of the violence and looting that took place in the same province in July last year. The DA calls on the police minister, Bheki Cele, to immediately intervene and ensure that the South African Police Services in the province are on high alert and immediately clamp down on these incidents,”

He went on further to add that KZN cannot afford the same catastrophic consequences of last year’s unrest.

“We now know that at the time, the government, and especially SAPS, has not been able to quell this unrest quickly and in a timely manner. Under no circumstances can we allow this to happen again. Bheki Cele must immediately ensure that enough police are deployed in the affected areas and that any sign of illegal behaviour is dealt with immediately and decisively,”

LOOTING AND PROTESTS IN KZN

According to reports from eNCA’s Dasen Thathiah, trucks and containers were being targeted by large gatherings of people in the uMlazi area.

It was speculated that the containers were targetted as they were accessible, although many decided to brave the channels of the newly formed rivers to reach the goods.

Towards the north of Umlazi in KZN, trucks were under attack and drivers were threatened for their cargo by the desperate residents ravaged by the floods.

Thathiah, who had an aerial view, said police presence was limited but this was likely due to them being dispatched for rescue efforts.
Ian Cameron, the director of community safety at the civil rights organisation Action Society, confirmed the looting in Umlazi was between uMlazi’s Mega City and Pascoe Road on Tuesday afternoon.

Later on Tuesday evening, Cameron took to Twitter to say PEP stores in the province were also looted.

Prem Balram of Reaction Unit South Africa says residents hit by the floods blocked off the north and southbound lane of the R102 in the vicinity of Canelands in Verulam, north of Durban.

“Protesters are demanding that alternate housing be provided after their informal dwellings were destroyed on Ramnath Road in Coniston during the floods yesterday. Burning tyres are strewn along the southbound lane while debris has been used to block off the opposite lane. Motorists are urged to use alternate routes,”