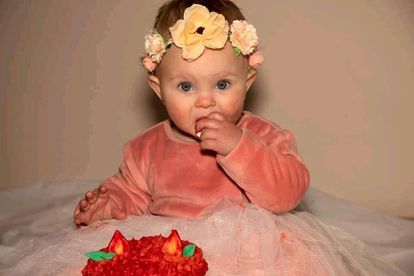 Little Isabella Stark (1) died in hospital on Monday afternoon, a week after choking on a cookie at her home in Ermelo.

According to the family spokesperson Juliet Basson, Isabella had swelling in the brain.

“On Monday the doctors phoned to say the family should come to the hospital. She was on an artificial life support machine as her brain did not get enough oxygen.

An emotional Basson said the decision was made to switch off the machines.

“She died the moment the machine was switched off.”

Her dad Joshua wrote the following on social media on Monday afternoon:

“God blessed us with a angel her name was Isabella she has left us and now with Jesus. We were blessed to have her for 15 months in our life were she ruled our lives and we loved every moment she has touched so many lives and now she is up in heaven watching over us as a angel ???? and keeping us safe and all we can say is thank you to each and everybody that has been praying or made a contribution we will let know what and how from now we will be coming back to the hospital to get all things in place and settle bills or make payment arrangements.”

Little Isabella was rushed to the hospital last week on Monday.

Basson earlier said Isabella was walking around as normal, eating a Macadamia cookie, when she stumbled and inhaled as she fell down. This forced parts of the cookie down her airway and into her lung.

She was rushed to the Ermelo Provincial Hospital,, where she was declared clinically dead for a minute or two as her heart stopped beating, but luckily doctors could revive her.

“Isabella was immediately put in an induced coma and on a ventilator.”

ALSO READ: Little Isabella (1) in a medically induced coma after she choked on a cookie [Video]

Basson said the family realised that she would need specific medical care and that there were no available beds in the provincial hospitals.

“Isabella needed to be admitted to a hospital with a pediatric intensive care unit.”

By Monday evening, they had raised enough funds so that Isabella could be airlifted to Netcare Garden City Hospital in Johannesburg.

Basson said Isabella was taken to the theater on Monday evening.

Doctors were able to remove the particles from the lungs, and Isabella was given neuroprotection therapy, which kept her sedated. Her parents, Joshua and Monica took turns to be at her bedside.

Basson said the Stark family had been overwhelmed with the support and love they have received thus far.

“We would like to thank each and everyone for the messages, calls, the love, and support we have received. We appreciate it.”