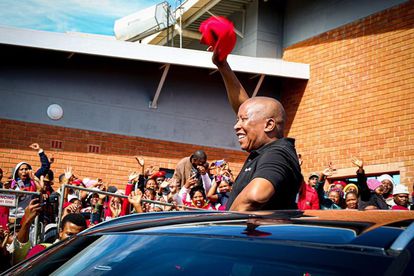 EFF leader Julius Malema has lined up his next target in the ANC. He has set his sights on Eastern Cape Premier Oscar Mabuyane, accusing the ANC representative of ‘allowing corruption to flourish’ within the province.

Why is Julius Malema demanding jail time for Oscar Mabuyane

Malema was in Matatiele, Eastern Cape to address crowds on Women’s Day. The far-left politician hailed the thousands of female protesters who opposed the ‘dompass laws’, enforced during the brutal apartheid regime. Juju also paid tribute to all the mothers and maternal caregivers.

However, this positivity was soon replaced by a bitter onslaught. Malema hammered Mabuyane, saying that corruption had ‘collapsed the Eastern Cape’ on his watch. The 41-year-old firebrand didn’t just stop there, though.

Malema told those in attendance that he wants Oscar Mabuyane behind bars for his role in ‘the decay of public service’. Like many ANC critics, the Red Berets’ head honcho is now hopeful that the ruling party will be punished by the electorate in the 2024 General Election.

MALEMA: Oscar Mabuyane must be rotting in jail as we speak now because of the corruption that is happening in this province. #EFFWomensDay

With the ANC barely scraping 45% of the vote during the 2021 Local Elections, the 110-year-old organisation faces a mountain to climb if they are to win back the trust of a majority. But if Julius Malema gets his way, people like Oscar Mabuyane will be in jail before the voting booths open.

“I came here to start a journey to stop corruption in Matatiele and in the whole of Eastern Cape. Oscar Mabuyane must be rotting in jail as we speak now, because of the corruption that is happening in this province.”

“These roads that you see, that are not finished – whoever got the tender must be arrested. Let them be punished in 2024 so that they become ordinary people. Corruption has collapsed this province of Eastern Cape.”