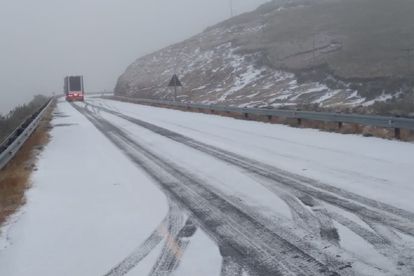 The snow forecast for the week ahead has now intensified for South Africa – Photo: Rob Beezy / Twitter

The snow forecast for the week ahead has now intensified for South Africa – Photo: Rob Beezy / Twitter

The South African Weather Service has warned that tonight will be the coldest night of the year in some places over the inland parts of the country into Friday 23 July 2021.

A multitude of weather warnings remain in place across South Africa for the evening ahead, and for Friday morning. Johannesburg is currently experiencing its coldest day for almost 10 years.

SA’S COLDEST NIGHT OF THE YEAR

As it stands, other parts of Gauteng, the Eastern Cape, and Free State continue to battle with the freezing conditions. However, the big freeze has been felt elsewhere.

The four record-breakers can be found in four different provinces. One of these ‘coldest ever temperatures’ has just smashed a 48-year-old low, and one particular thermometer reached the freezing depths of -7.5C.

The City of Johannesburg also issued a warning to its residents about tonight’s cold temperatures. The City is currently experiencing its coldest day since 10 years ago.

Farmers and citizens were advised to take the necessary precautions ahead of the expected cold snap and to ensure that livestock and pets have sufficient shelter and water.

A Yellow Level 2 warning for snow, leading to difficult driving conditions over the southern parts of the Free State, is in place for Thursday.

Other Yellow Level 4 warnings have been issued this week:

One is in place for flooding in Cape Town, the Cape Winelands, and Overberg on Wednesday, and another has been declared for torrential rain between Plettenberg Bay & Fish River on Thursday.

Snow was spotted in several parts of the country today, especially in the Cape provinces.