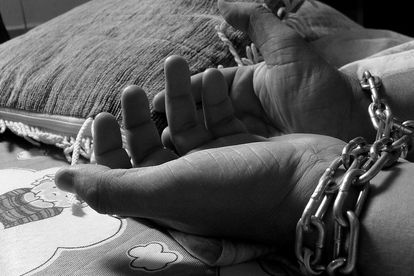 It’s a story that could quite easily turn a few stomachs – two people have been arrested in Mpumalanga, after they were caught running a human trafficking operation that bussed-in DOZENS of victims from outside of South Africa.

SAPS confirmed that the suspects, both aged 32, are now in police custody, and judicial processing awaits them. The operation itself was an elaborate scheme, which saw women, men, and VERY young children exploited in exchange for ‘hard labour’ on a local farm.

A statement was issued by Mpumalanga SAPS on Monday morning, confirming a number of key details. Nine of the victims were just five-years-old OR YOUNGER. The police sting that brought these criminals down was led by the Nelspruit Flying Squad, and the Department of Home Affairs.

“A total of 39 victims – including seven women, nine children under the age of five, and 23 males all over the age of 18 – were rescued from a farm in Belfast during an operation by members of Nelspruit Serious Organised Crime, Flying Squad,  Department of Labour and Home Affairs.”

“Two suspects aged 32 were arrested on 24 June 2022. The investigation is continuing and more arrests are expected.”

#sapsHAWKS Mpumalanga: 2 #HumanTrafficking Suspects aged 32 were arrested on 24/06 and 39 victims including 7 women, 9 children and 23 males were rescued from a farm in Belfast during a multi-disciplinary op. The rescued victims are at a place of safety MEhttps://t.co/uzqqUqNVbp pic.twitter.com/6zTcchjQKw