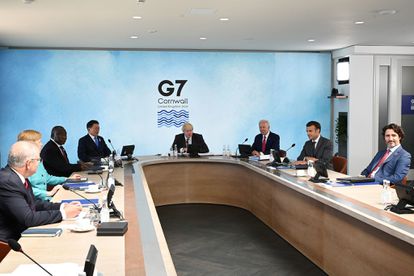 It’s nice work if you can get it: South Africa’s government officials are poised for a 3% pay rise during the upcoming financial year – and the increases will take President Ramaphosa’s annual salary past the R3 million mark.

How much does Cyril Ramaphosa earn as President?

According to a newly gazetted report, Cyril will receive R3.079 million over the next year for his work as our head of state. That translates to approximately $212 000 – and it’s more than most other presidents get.

Rough estimates suggest that Ramaphosa is now ‘within the top 25 highest-earning world leaders’, and his salary is about on par with that of UK Prime Minister Boris Johnson, who makes an estimated $217 000 each year.

How does Cyril Ramaphosa’s wage compare to the highest-earning world leaders?

It’s worth noting, though, that President Ramaphosa still has a fair way to go before he’s up there with the big guns. The Prime Minister of Singapore is banking a $1.6 million salary each year. The US President Joe Biden makes roughly double the amount afforded to Cyril, and Australia’s Scott Morrison completes the top five.

CR is one of Africa’s highest rollers

To break into the top 10 highest earning world leaders, Cyril Ramaphosa would need to be earning something in the region of $278 000. This is not a million miles off what he’s set to earn in 2022 – and its estimated his salary has come close to this figure before, when the USD/ZAR exchange rate was more favourable.

However, Ramaphosa’s wealth is best viewed in a more localised context. His new wage means that he’ll be the THIRD-BEST paid leader in Africa, bested only by the King of Morocco and Cameroon’s long-reigning president.

A look over the neighbours’ fence shows us that Zimbabwean President Emmerson Mnangagwa earns considerably less than Cyril. According to Business Insider, he pockets roughly $146 000 each year.