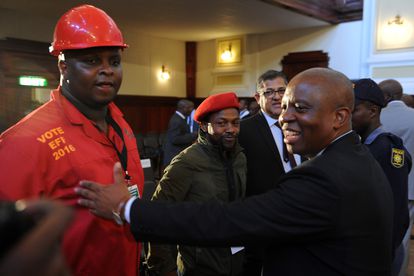 On Monday night, Herman Mashaba logged into his Twitter account, and posted a GIF of himself sipping tea. The caption read ‘chess, not checkers’, and sent the rumour mill into overdrive. Just a few hours later, the ANC had lost control of the Johannesburg and Ekurhuleni metros – with Tshwane also set to fall under DA rule on Tuesday.

For the ActionSA leader, he was celebrating a job well done – but claims he couldn’t have done it without the help of an old frenemy. Mashaba revealed that his plot to bring down the ANC, effectively booting them out of government in EVERY Gauteng metro, was only put into place following a phone call he made to Floyd Shivambu.

The EFF Deputy Leader, it is alleged, was told by Mashaba that there was a way to prevent the ANC from taking control of the remaining hung metros – while also granting ‘a route to power’ for both the Red Berets and ActionSA.

Herman Mashaba explained that both parties could vote for DA candidates in these cities, and FORCE the Blues to work with the minority groups, despite their previous refusal. This, in turn, would flip the South African political landscape on its head, giving the smaller parties more power than the ANC would hold.

“We learned that the DA wanted to give municipalities to the ANC. So I gave Floyd Shivambu a call, and said to him, ‘I know I’m a political illiterate, but this is a big opportunity to save our country’. Thankfully, the EFF liked the idea, and they were very supportive. We made sure our caucuses were aware, and then executed our successful plan.”

Herman Mashaba, speaking to the media on Tuesday 23 November

Herman Mashaba ‘aware of challenges ahead’

Mashaba may have succeeded on his hellbent plot to prevent the ANC from ruling several key metros in South Africa. But that doesn’t mean the governments of Johannesburg, Ekurhuleni, and Tshwane will be utopian examples of coalition brilliance. Indeed, Herman himself was keen to stress his party has ‘no agreement’ with the DA.

These unsteady alliances will be tested in the years to come. But if nothing else, Herman Mashaba has shown that he and ActionSA can be more than just political disruptors – they possess the ability to cause seismic power shifts.

“One thing South Africans must understand is that ActionSA has no agreement with the DA. We have tried since the election, but they dealt with us in bad taste. We felt betrayed. They gave us an impression they wanted to work with us, but dropped it on Saturday. That made us very, very angry.”