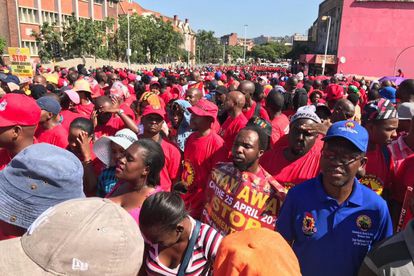 Herman Mashaba has made no bones about it. He is categorically OPPOSED to the National Shutdown taking place on Wednesday 24 August. The planned strike action, lead by SAFTU and Cosatu, is set to bring parts of South Africa to a standstill.

The ActionSA leader, who unashamedly identifies as a pro-business capitalist, feels that the National Shutdown will do nothing to ease the pressure on an ailing economy. Instead, he only sees a countrywide strike EXACERBATING these problems.

The 13 million unemployed South Africans, and those still to loss their jobs as a result of this shutting down called by the beneficiaries of your suffering, WAKE UP! https://t.co/qNXqyTJhdt

Herman Mashaba elaborated on his thoughts further on Monday. He suggested that the union bosses who have organised this industrial action must face some form of punishment – and he wants to top brass at SAFTU and Cosatu to forfeit their wages while on the picket line.

“I am beyond words to understand how COSATU and SAFTU believe shutting down the economy, which themselves have deliberately destroyed over the last 28 years, will improve our economy.”

“This National Shutdown is to advance political careers of Union Leaders at the expense of the workers. Let them also commit that every time they call for a strike, with no work and no pay, they MUST also not be paid by the Unions.” | Herman Mashaba

Some economists also share Mashaba’s cynicism. Isaac Matshego told EWN that the longevity of the National Shutdown ‘won’t be enough’ to achieve meaningful change. However, SAFTU have floated the possibility of extending their strikes past Wednesday.

“Staying away from work, particularly for one day, will not really achieve any objective. I’m not justifying a longer stay away because that would be more damaging. It may only serve to damage the economy further.” | Isaac Matshego