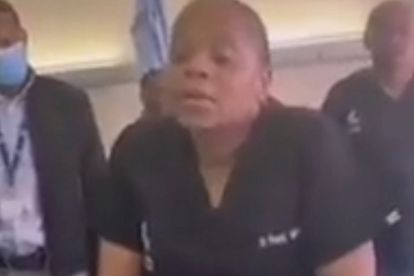 Limpopo Health MEC Dr Phophi Ramathuba soon finds herself at the centre of yet another controversy, in the wake of a cringeworthy clip making the rounds on social media.

In the video, Dr Pophi Ramathuba can be seen confronting a Zimbabwean patient at a Bela-Bela hospital about their immigration status, telling them her department does not have the budget to accommodate foreign nationals.

“How do you find yourself in Bela-Bela when you are supposed to be with Mnangagwa (Zimbabwean president Emmerson Mnangagwa) there? You know he doesn’t give me money to operate you guys and I’m operating you with my limited budget,” Ramathuba tells the woman.

The patient responds by saying she appreciates it, but that doesn’t stop the MEC from going on about her department’s budget constraints, which are further exacerbated by the fact that Zimbabwean nationals in the country also depend on government services/faclities.

“When you guys are sick, I’m hearing these days you just say, ‘let’s cross Limpopo river, there is an MEC there who is running a charity department. It’s not,” Ramathuba said.

Earlier this year, Ramathuba sparked outrage when she told Limpopo female learners to “open their books and close their legs” in an attempt to address teenage pregnancy. Many accused the MEC of only targeting girls during her speech, but she hit back, saying boys were also called out.

The health MEC explained that the children she was talking to do not have anyone to explain things like protected sex and menstruation to them, which is why she felt her words are justified.

“Teenage pregnancy is rife among the poor and working class. The affluent do not understand. My children and their children [the Twitter parents] know everything about reproduction because we sit with our children and explain things like menstruation, menopause, protective sex… we even teach them what is an orgasm,” she told Tshisa Live.