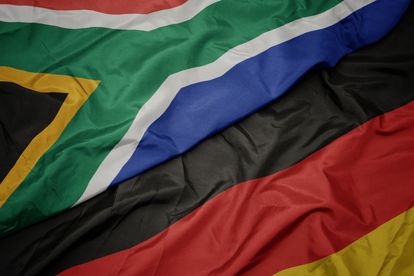 There are strong economic ties between Germany and South Africa, but diplomatic ones are now on the ropes – Image credit: AdobeStock

There are strong economic ties between Germany and South Africa, but diplomatic ones are now on the ropes – Image credit: AdobeStock

‘Shots fired’, as the kids would say: The German Embassy in South Africa has taken a dramatic swipe at the ANC government, and its apparent support for Russia. The Twitter account linked to the consulate gave a damning assessment of Mzansi’s diplomatic position, and their scathing post has gone viral.

The German Embassy responded to a Tweet shared by its Russian counterpart, which thanked its supporters in South Africa. The consul uses the debatable claim that it is ‘fighting Nazism in Ukraine’, and praised a number of prominent SA nationals for ‘showing solidarity’ with the Kremlin.

“Dear subscribers, we have received a great number of letters of solidarity from South Africans, both individuals and organizations. We appreciate your support and glad you decided to stand with us today, when Russia, like 80 years ago, is fighting Nazism in Ukraine!”

‘Shame on you’ – German Embassy goes viral for SA criticism

However, this has sparked a furious reaction online. As users flocked to condemn the misleading message, the German Embassy stepped in with a Tweet that has all but humiliated the ANC over its support for Russia.

The account called the Russian invasion of Ukraine exactly what it is, labelling it as a ‘slaughter of men, women and children’. They also scoffed at the notion of Vladimir Putin wanting to eradicate Nazis from the neighbouring nation, and compelled those who fell for this lie to ‘feel some shame’.

Sorry, but we can't stay silent on this one, it's just far too cynical. What ???????? is doing in ???????? is slaughtering innocent children, women and men for its own gain. It's definitely not "fighting Nazism". Shame on anyone who's falling for this. (Sadly, we're kinda experts on Nazism.)

Russia may have been a good friend to South Africa during the dark days of apartheid, but retaining that support while Mr. Putin continues to lead an invasion of a sovereign nation is based on a lack of critical thinking.

The world has change immeasurably in the last 30 years. South Africa, with its modern and inclusive Constitution, is treading a dangerous path by investing its blind loyalty into a country that’s currently shelling hospitals in Ukraine. After all, being a ‘good friend’ means having the courage to clearly separate rights from wrongs.