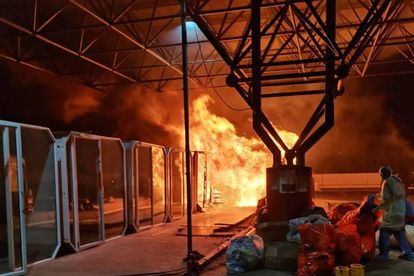 A handful of patients at the Steve Biko Academic facility had to be moved from their wards on Monday morning, as a result of this latest Gauteng hospital fire. The provincial department of health confirmed that workers on site were able to put of the flames themselves.

However, a number of temporary structures – including storage areas, isolation units, and triage tents – were damaged by the blaze. Most importantly though, this fire never became an inferno, and was quelled almost immediately.

In total, 18 patients were affected and had to be evacuated from their locations. A corpse also had to be moved for safety reasons. At around 1:20 on Monday 30 May, hospital staff were alerted to the troubling situation.

Meanwhile, Gauteng’s Health Department confirmed that the fire did not take place within the casualty area of Steve Biko – but they’ve so far had no luck in identifying the cause. Investigations will continue in earnest on Monday.

“The Gauteng Department of Health can confirm that a fire broke out at Steve Biko Academic Hospital in the early hours of Monday 30 May. The fire, which affected temporary structures at the facility, was successfully put out by workers.”

“Thankfully, there were no casualties to report. Eighteen patients and one corpse had to be moved as a safety precaution. The fire broke out at around 1:20, in a temporary storage area used for COVID-19 medical waste and an in-transit corpse area.”

“It also affected a special temporary isolation unit and a triage tent, used for persons ‘under investigation’. The affected structures were located outside the casualty area of the hospital, and the cause of the fire remains unknown.”

You can see the full statement from the Gauteng Health Department here: