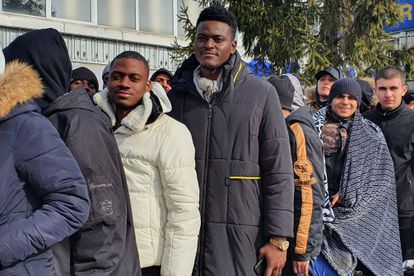 Foreigners wait to go to Poland at the Shegyni Ukrainian border post on March 01, 2022. – Hundreds of foreigners, mainly students from Africa, Asia and the Middle East who have been queueing for days in vain, hoping to go to Poland, but they say the Ukrainian border forces deny them the right to go through, while Ukrainian families can. This situation causes outrage in Africa, where several countries and the African Union complained about this discrimination and talked about racism. (Photo by Emmanuel DUPARCQ / AFP)

Foreigners wait to go to Poland at the Shegyni Ukrainian border post on March 01, 2022. – Hundreds of foreigners, mainly students from Africa, Asia and the Middle East who have been queueing for days in vain, hoping to go to Poland, but they say the Ukrainian border forces deny them the right to go through, while Ukrainian families can. This situation causes outrage in Africa, where several countries and the African Union complained about this discrimination and talked about racism. (Photo by Emmanuel DUPARCQ / AFP)

Jean-Jacques Kabeya is furious: like other foreign students in Ukraine — from Africa, Asia and the Middle East — he says has been stopped from leaving the country by its border guards.

He and several other foreigners alleged racist treatment by both the border guards and ordinary Ukrainians in interviews to AFP.

Two days after fleeing the bombing around the eastern city of Kharkiv, Kabeya reached the checkpoint at Shegyni, at the border with Poland, on Sunday evening.

But the soldiers and security guards there turned him back, said the 30-year-old student studying to become a pharmacist.

“They told me ‘You’re going to stay here, you’re fleeing the war, stay here; you are going to fight with us — you’re not leaving, least of all you blacks’,” he said.

Now, after 36 hours waiting in vain to get through, he was back at the train station in the western city of Lviv.

There he found some compatriots from the Democratic Republic of Congo, who took him under their wing.

“It’s a catastrophe!” said Kabeya, adding that he was still trying to find a way out.

Ukraine is a popular destination for foreign students, with tens of thousands heading there to study.

But other foreign students in Lviv had similar stories to tell, and the governments of Nigeria and South Africa have already called for better treatment for their citizens.

The African Union issued a statement Monday expressing concern at what appeared to be “shockingly racist” treatment of foreign students.

Some countries did however report that a few dozen of their citizens had managed to leave the country.

LIVE UPDATES: Latest news from the war between Ukraine and Russia

At Shegyni border post on Tuesday morning, there were still several hundred people, muffled up against the cold, queueing patiently to make the crossing.

They were from Pakistan, India, Algeria, DR Congo, Cameroon, Ghana and Algeria. Some said they had spent four nights there, with temperatures dropping as low as -10° (14 degrees Fahrenheit), in a desperate bid to leave.

On the other side of the road was another queue, reserved for Ukrainians — mainly women and children as most men had stayed behind to fight.

That line was moving more quickly.

“All of us, we’ve got our papers,” said Mesum Ahmed, a 23-year-old computer student from Pakistan. “Because we’re foreigners, they are treating us like dogs.

“We’ve been sleeping here, on this pavement,” said Ahmed, dressed in denim and sporting a beanie and a travel pillow around his neck.

“But the Ukrainians, they couldn’t care less.”

“You can see fine well what separates them from us,” a young Nigerian added, bitterly. “We’re black, that’s what it is.”

The only help on hand was from the local volunteers serving them hot drinks and sandwiches.

“We’re here, we wait, and they don’t tell us anything,” said Richard Adjen Kusi, a student from Ghana.

He left the central city of Cherkassy when Russian President Vladimir Putin “started talking about nuclear weapons three days ago.”

But everything seemed to be blocked here, he said. “It’s not moving one centimetre…I’m scared.”

A group of around 30 students from Cameroon who until recently had been in the central city of Kirovograd said it was only in the last few days that they had experienced racism in Ukraine.

Before the war, everything had been fine.

But Bryan Famini, a 22-year-old economics student, said that changed with the invasion.

“In the stations, on the trains, were were systematically kept away from the seating,” he said.

“Some Ukrainians even made fun of us from their cars, seeing us walking,” said 22-year-old Ghislain Weledji.

“I’ve been disappointed by this country,” he added. “I won’t be coming back.”

Ukraine’s border service denied there had been any difficulties.

“Nobody has been prevented from leaving Ukraine,” they told AFP. No they had received no complaints.

On the Polish side, officials confirmed that anyone fleeing Ukraine would be welcomed, whatever their nationality.

As well as the nearly 680,000 refugees who have already left Ukraine, there are an estimated one million who have had fled their homes but are still inside the country.

At Lviv station, 70 kilometres (44 miles) from the border, thousands of Ukrainians — and some foreigners — were still waiting Tuesday, in the hope of getting a place on one of the rare trains leaving for Poland.

Amanjyot, a 23-year-old medical student said she had tried to board one train the day before but that Ukrainians had been given priority.

But she and her friends were grateful for the succour provided by Ukraine’s Red Cross workers and other charities in front of the station.

“They help so much!” she said. There was plenty of food and they took care of everyone, without discrimination, she added.