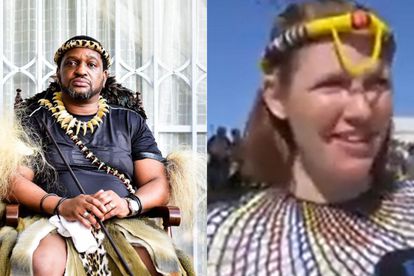 It has been more than a week since Amelia’s spur-of-the-moment interview on eNCA at the coronation of King MisuZulu, but believe it or not, there is still much curiosity about the mystery woman who declared her bid to become the Zulu nation’s first white Queen.

King MisuZulu, the son of the late King Goodwill Zwelithini and Queen Mantfombi Zulu, finally assumed the throne this weekend during proceedings at KwaKhangelamankengane Royal Palace in Nongoma, KwaZulu-Natal on Saturday, 20 August 2022, amid several bids for the coveted crown.

AMELIA WANTS TO BE THE NEXT ZULU QUEEN

As probably the only white person at the proceedings, Amelia stuck out on like a sore thumb, which is how she managed to grab the attention of a reporter who had been covering King MisuZulu’s coronation. On Wednesday, 24 August 2022, Amelia spoke to radio station 5fm about her quest to win King MisuZulu’s heart and revealed some pretty interesting things about herself.

With the story having piqued the interest of many, the woman told the radio station she would prefer to remain anonymous and only reveal limited details about her personal life.

While Amelia is more an alter ego, Avril had intended to user her character to prompt discussions about race in South Africa.

“It’s a wild idea and I think it has really captured the nation’s imagination because it certainly captured mine, before I blurted it out on TV. This idea of a white woman who wants to be queen. I think there is this narrative that white people need to step away now and be very quiet because everything is just to tender and tense. So it is obviously outrageous, this white woman coming up and wanting to claim what one might say could never belong to her. But of course, we can’t go back in history and we can’t undo what needs to be done,” she said.