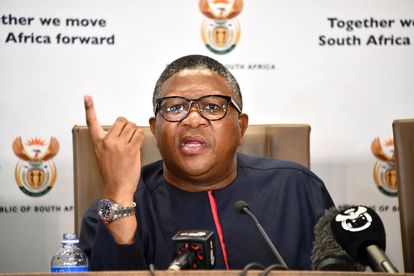 Pretoria News reported that Mbalula accused Gordhan of leaking information about him, with the end goal being to intimidate and cause some kind of rift with Ramaphosa.

Fikile Mbalula was quick to call out Pretoria News editor Piet Rampedi over the story, which he has dismissed as “fake news” on his social media pages.

Mbalula was quick to remind Rampedi about what is probably his biggest blunder as a journalist yet – the Tembisa 10 scandal, writing on Twitter: “The country is still waiting for Ten babies Piet Rampedi.”

In June 2021, Rampedi’s story of how a Tembisa woman delivered seven boys and three girls via Caesarean section at an undisclosed Pretoria hospital, dominated headlines. If true, the story would have earned Gosiame Sithole, a spot in the Guiness Book of Records for the most children birthed by one woman at once. But the story would soon crumble as authorities, including the Gauteng government, were not able to prove the existence of the babies. Independent Media, which broke the story, maintains it is legitimate – even going on produce a docuseries which claims the decuplets were trafficked soon after they were born.

Meanwhile, this isn’t the first this week that Mbalula has had to dismiss news reports as false. Sunday Independent had claimed the minister was kicked out of a meeting by Ramaphosa as he was ill-prepared.

“The media is fed under current by faceless people. We are a public entity, and we are public representatives, and we have got to account and explain ourselves. It’s like you are media and somebody tells you that Mbalula was expelled out of Cabinet, and you believe that, you write it, then you don’t take yourself seriously. You should know as an editor that such nonsense cannot happen in Cabinet. Not even in a spaza shop a person can be treated that way,” said Mbalula.

YOU CAN ALSO READ: