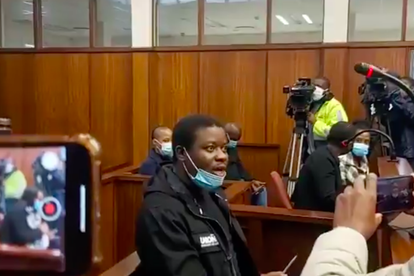 FeesMustFall activist Bonginkosi Khanyile, who is facing charges of incitement to public violence related to the recent unrest in Gauteng and KwaZulu-Natal, was granted bail under strict conditions in the Durban Magistrate’s court on Tuesday.

Interestingly, one of the conditions was that Khanyile, 31, must not use his Twitter account, which the court has also required him to suspend.

Khanyile, 31, who had earlier addressed the media from the dock remarking that supporters of former President Jacob Zuma had “triumphed” because he had been released on medical parole, was granted R5000 bail. The court imposed several strict bail conditions on Khanyile. This comes after the State earlier argued that he would not be likely to respect bail conditions.

Khanyile faces a charge of incitement to commit public violence as well charges of contravening of the Disaster Management Act (DMA). He allegedly held public gatherings in contravention of the DMA and was also allegedly seen in a public space without wearing a mask.

“He was warned that should he breach his bail conditions, the state can bring an application to have his bail revoked and he can be kept in custody for the duration of the criminal matter,” Kara said.

Khanyile earlier addressed journalists from the dock on Tuesday saying “ Zuma is out. It does not matter racists are running naked…look at them… look at the idiots… look at whites they are shaken. If I am released, it  does not matter only god knows, but at the end our cause has triumphed we told you that, we told them.”

The matter was postponed to 23 September 2021 for the matter to be transferred to the regional court.

Khanyile is among several suspects that have been arrested on charges of inciting public violence that led to the riots and looting in the two provinces in mid-July.