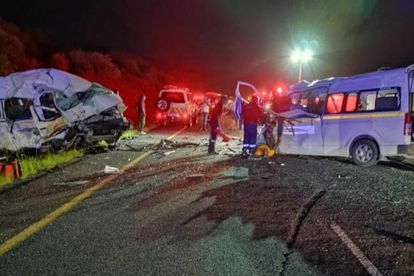 A horrific vehicle accident has left at least 19 people dead in the North West. According to the Road Traffic Management Corporation (RTMC), the crash occurred on the R34 highway between Shweizer-Reneke and Bloemhof on Saturday evening, 26 February 2022.

It is believed that the victims were all family members who were travelling to Bloemhof in a Quantum when it collided with a truck.

The details pertaining to the road crash in the North West remain unclear at this stage, but the RTMC says it will be investigated by its crash and construction unit.

“The RTMC is sending investigators to the scene to establish the exact cause of the crash. All we know at this stage is that it happened around 9.30pm near Schweizer-Reneke in North West and involved a truck and Quantum minibus,” said RTMC spokesperson, Simon Zwane.

“#19 people who are family members have died in a head on crash btwn a Quantum travelling from Bloemhof to Schweizer-Reneke and the truck. The accident will be investigated by RTMCs crash and reconstruction unit,” the RTMC wrote on Twitter.

The crash comes just two months after Transport Minister Fikile Mbalula released the road statistics this past festive season, which painted a grim picture of the lack of road safety awareness. A total of 1 685 people died in traffic incidents during the 2021/22 festive period. That’s up by 14% on the previous year.

According to the minister, the fatalities-per-crash ratio has also spiked – which means ‘Mr. Fix’ has a lot of work to do, in order to live up to his self-given nickname.