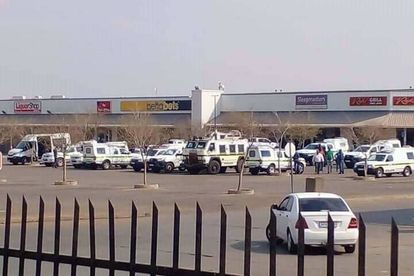 It seems that the festivities are beginning a few hours early this weekend, amid fears that South Africa could see another wave of unrest due to the planned ‘National Shutdown’ on Monday. Evaton Mall in Sedibeng was forced to close its doors earlier today, as rumours of an alleged looting attempt filtered through to the authorities.

Aparantly the Mall got info about posible attack on the Mall, so the security forces, taxi operators and nearby community members moved swiftly to protect the @Evaton_Mall. #ProtectSA #VaalTwitter #Police pic.twitter.com/cJoYNJpNk2

Evaton Mall closed on Sunday – due to looting fears

Blue Hawk Tactical, a security firm based in Gauteng, has since responded to the matter themselves – revealing that Evaton Mall may have been the target of a possible attack. Several law enforcement agencies are now at the scene.

A spokesperson for the Police Ministry confirmed on Sunday that NATJoints are on ‘high alert’ for widespread disruption tomorrow. It’s believed that those instigating the trouble will carry on from where the July Riots left off, and national key points are rumoured to be the next conquest for certain ringleaders. The ANC have distanced themselves from it all:

“Posters of the planned shutdown circulating on social media are unlawfully bearing the logo of ANC – without any consultation with the organisation.” | Provincial spokesperson for the ANC in KZN, Nhlakanipho Ntombela

“The ANC KZN has, in countless times, declared its support for former president Jacob Zuma, and we also respect the rights of individuals to peacefully protest using legitimate channels as inscribed in our democratic constitution, however exercising such right should not infringe on the rights of others or break any laws.

“People should refrain from using the former president Jacob Zuma as a scapegoat for violence, and we urge law enforcement agencies to act firmly and expeditiously, within the law, against any form of lawlessness, public violence, damage to property, and disruption of economic activity,”