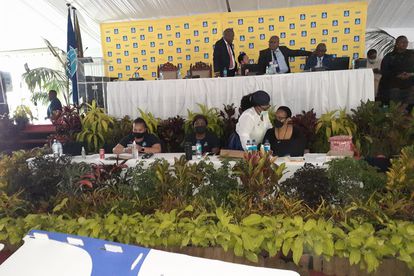 Wow… wow, wow, and another wow. In times like these, finding the words to articulate such a huge political development doesn’t come easy. But we’re happy to stick with that first sentence. The meeting of the eThekwini Council has descended into chaos, after the IFP sensationally DUMPED the ANC and their coalition agreement.

IFP ditch agreement with ANC – but why?

Last week, both the ruling party and the IFP made a pact to vote for each other in the remainder of hung municipalities across KZN. This would have resolved the impasse currently plaguing the province, and certainly, Cyril Ramaphosa was hoping for a reprieve from a poor set of elections. However, the flimsy deal has collapsed within days.

That’s because the IFP is understood to be dismayed with the ANC’s insistence on keeping Mxolisi Kaunda as their mayoral candidate in eThekwini. This allegedly broke the pact agreed between the two parties, and the political underdogs have decided to pivot away from the ANC in dramatic style…

The agreement between the IFP and ANC in KZN is in shambles. The IFP has taken over the Mayorship of Newcastle Municipality (Amajuba). The agreement was supposed to see the ANC take over as the leading party. Interesting developments. pic.twitter.com/M5Dik3VIOr

The IFP is now likely to back the DA in eThekwini, with the EFF also understood to be supporting the Blues.

Of course, all of this high drama has brought protests from the ANC benches. Both councillors and gatvol party supporters have disrupted the voting proceedings in eThekwini, with a number of female members breaking into the Council Chambers. Nicole Graham, the DA candidate for Mayor, has described what she witnessed:

A mob of ANC supporters (unarmed, mostly women) have broken into Council and marched around our benches. Metro Police, SAPS, security galore and dololo. Everyone just sat and watched. They’ve walked away with no arrests.