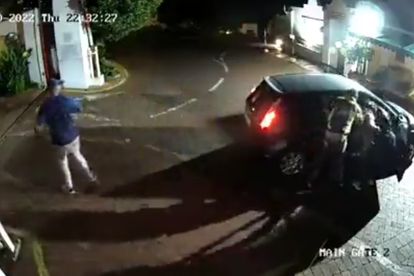 An elderly man has been killed in a hijacking, and it all plays out on shocking CCTV camera footage. Details are rather sketchy at this stage, but according to Ian Cameron, an anti-crime activist and spokesperson for Action Society, the incident occurred on 20 January 2022 at a retirement village in Linden, north of Johannesburg.

The video, which was also shared by Cameron, shows the men accosting the man as he is about to drive into the retirement village’s yard. The security who had been approaching the gate notices the encounter and flees. The man appears to resist the hijackers’ advances and is eventually shot and dragged out of his car.

The criminals then drive off with his black Ford Fiesta.

WARNING: The contents of this video may not be suitable for sensetive readers.

Gauteng police have launched an investigation into the man’s death.

Swisherpost has cited a source as saying:

“The resident saw them and asked the guard to quickly open the gate which he did but the villains quickly jumped out their car and ran next to the resident’s car with a gun. They told him to open the window but he was busy driving in so they just shot him three times which resulted in the  car crashing into a pot plant. They threw him out the car and went off with it. Unfortunately the resident died on the scene”

In reacting to the clip, one social media user claimed the man had just sold his car and was preparing to move to the United Kingdom (UK) to be with his children.