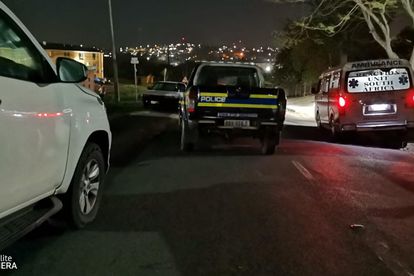 An elderly couple were repeatedly stabbed when their son held them hostage in their home during the early hours of Wednesday.

According to Reaction Unit SA spokesperson Prem Balram the couple were rescued when the SAPS Task Force stormed a bedroom where the son had barricaded himself and his parents.

“An elderly couple is currently receiving medical attention after they were repeatedly stabbed by their son while being held hostage at their flat in Dhalia Road in Buffelsdale, Tongaat.”

Balram said the 34-year-old son was taken into custody at approximately 02:39 by the SAPS Task Force after they stormed a bedroom where he barricaded himself and his parents.

ALSO READ: Loving couple brutally attacked and killed with an axe in Sasolburg

“The son was armed with a kitchen knife which he used to stab his 79-year-old father and 68-year-old mother repeatedly.

“The man is believed to be bipolar; however, this could not be confirmed.”

Paramedics from Reaction Unit South Africa (RUSA) treated the couple for multiple stab wounds before transporting them to a medical facility.

Balram said the motive for the attack has not been confirmed at this stage.

Earlier this week, the decomposing body of a 68-year-old woman was recently discovered in her home that she shared with her mentally challenged daughter in Palmview.

THE DAUGHTER THOUGHT HER MOTHER WAS SLEEPING

According to  Balram they received a call from a neighbour at approximately 18:08 on Monday evening.

“The neighbours requested assistance after hearing of the discovery.”

Balram said reaction officers and paramedics were dispatched to the residence.

“On arrival, the 47-year-old daughter led officers to a bedroom where she insisted her mother was asleep.

“The elderly woman was discovered on her bed, partially covered with a blanket. Her body was in an advanced stage of decomposition.”

Balram said to neighbours, the deceased was last seen on Friday.

This was confirmed by her daughter who added that her mother had collapsed shortly after arriving home from shopping at a local supermarket. She assisted her mother to the bedroom where she fell asleep.

On Monday afternoon neighbours enquired about her mother’s well-being.

The daughter informed them that she was still asleep.