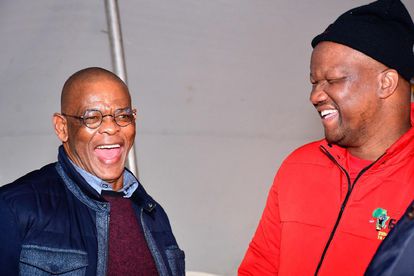 Is Ace Magashule out here making some seismic political moves? The controversial ANC stalwart turned heads over the weekend, when he attended an event in the company of senior EFF leaders – and some branches of the ruling party have lashed out at him.

Ace Magashule and the EFF: What’s going on there?

Both Ace Magashule and the EFF state that this was merely an act of observance. Suspicions of defection aren’t well-founded, according to those in the know. The ANC’s suspended Secretary-General went to Walter Sisulu Square with the Red Berets to acknowledge Freedom Charter Day.

The significant struggle-era event means a lot to the EFF, and Mr. Magashule felt it was necessary to join them in commemorating the date. However, one provincial branch has lashed out at him, saying that the corruption-accused politician had acted ‘irresponsibly’.

The Secretary General of the ANC @Magashule_Ace with the EFF leadership at the Walter Sisulu Square observing Freedom Charter Day The EFF is the only organisation that observed this historic day in the history of the liberation struggle#EFFFreedomCharterDay pic.twitter.com/ExDVmS88c4

ANC lash out at senior statesman for ‘irresponsible conduct’

Free State’s Interim Provincial Committee refused to mince its words. They told Ace Magashule that the act of attending a non-ANC-sanctioned event will now ‘tarnish the image’ of a party that is already struggling to create any semblance of a united front.

“The Free State Interim Provincial Committee of the ANC has noted with concern the conduct of suspended Secretary-General Ace Magashule, for attending the event of another political organisation (the EFF) that is not in alliance with our party.”

“Ace Magashule holds one of the highest positions within the ANC. His suspension does not disqualify him from upholding the discipline and principles that all members must observe. We deplore, in the strongest terms, this irresponsible conduct – which tarnishes our image”