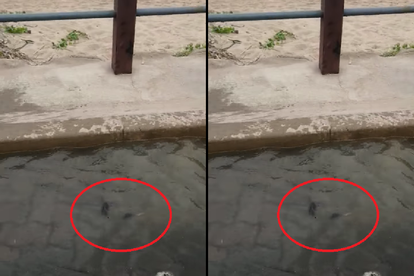 Bleurgh, this is disgusting! Locals in the plush region of Umhlanga, Durban have been left mortified by the current state of their adorned pier. The luxurious sea feature used to the jewel in the municipality’s crown. Now, it’s battling against a stream of HUMAN SEWAGE.

Footage uploaded to Facebook by the Umhlanga Ski Boat Club captured the horrific scene from earlier in the week. Brown effluent could be seen running downhill on the raised road, before dropping onto the beach. The waste poses a huge health hazard.

In recent weeks, a number of beaches around Durban and the coastline of KZN have been closed down. The sewage infrastructure in eThekwini has essentially fallen apart, leaving Durban and its surrounding areas to face a literal s**t-storm.

The man behind the camera in the video featured below gives us a rather graphic narration of the sights, smells, and sounds brought to Umhlanga by its new sewage stream. Brown, discoloured water flows down the main road leading to the famous pier.

In the footage, the filthy water can be seen dropping off the ledge of the road, and flowing towards the sea. An estuary of excrement can be seen covering a part of the beach. Actual turds, still whole, can also be seen floating in the foul-smelling stream.

The stench, by the way, makes the cameraman feel ‘physically sick’, and he threatens to vomit just moments before the clip comes to an end. Him and us both. We’ve watched it back several times, and unfortunately, any thoughts of an early dinner this evening have just gone down the toilet.

The eThekwini Municipality is now facing court action, as a result of its piss-poor sewage maintenance. A number of beaches remain out of action in this part of the country – and it could be a while before people feel comfortable visiting again.